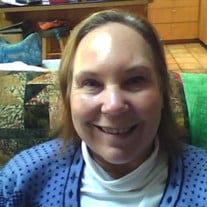 Theresa A. Burdick M.D., 72, of Cape Girardeau, Missouri died Tuesday, April 12, 2022 at her home. She was born February 21, 1950 in Wichita, Kansas to Charles Gilbert "Gil" and Catherine Felicia Lewandowski Burdick. She received Bachelor of Science and Medical Doctorate degrees from St. Louis University, where she also had an internship. She had residencies at the University of Washington in Rehab Medicine and the Obstetrics and Gynecology Department at St. Louis University. She had been an Obstetrics and Gynecology doctor in Seattle, Washington since 1975 and was in private practice at Swedish Hospital since 1981. She retired eight months ago and moved to Cape Girardeau. She also served on the Clinical Faculty at University of Washington Medical School, Department of Obstetrics and Gynecology and was a member of King County Medical Society. Theresa enjoyed quilting and loved to work in her garden. She was a longtime member of St. Therese Catholic Church in Seattle and joined St. Vincent de Paul Catholic Church after moving to Cape Girardeau. Survivors include two sons, Nathan Burdick of Cape Girardeau and Isaac Burdick of Seattle; one daughter, Madeline (Aaron "A.J.") Castle of Columbus, Georgia; three brothers, Bradley (Anna) Burdick and Brian (Cindy) Burdick both of Cape Girardeau and Robert (Melanie) Burdick of Lawrence, Kansas; and one grandchild, Zoe Castle. She was preceded in death by her parents; one brother, Charles Burdick and one sister, Connie Burdick. Visitation will be 5:00 pm to 8:00 pm on Tuesday, April 19, 2022 at Ford & Sons Mt. Auburn Chapel in Cape Girardeau. Parish prayers will be at 7:00 pm. Funeral services will be at 10:00 am Wednesday, April 20, 2022 at St. Vincent de Paul Catholic Church in Cape Girardeau with the Rev. Rick Jones officiating. Burial will be at St. Mary's Cemetery. Online condolences may be made at www.fordandsonsfuneralhome.com. Ford & Sons Funeral Home - Mt. Auburn is in charge of arrangements.

The family of Theresa Burdick created this Life Tributes page to make it easy to share your memories.

Send flowers to the Burdick family.