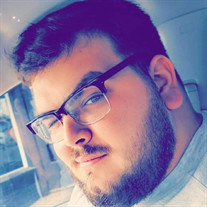 Zachary Albert "Zak" Mazade, 30 years old, passed away August 16, 2021 near his home in Jackson where he lived with his fiancé, Vesper Hawkins, and bonus son, Brendon Hawkins. Zak was born in Saint Louis on March 1, 1991 to Henry and Linda... View Obituary & Service Information

The family of Zachary Mazade created this Life Tributes page to make it easy to share your memories.

Send flowers to the Mazade family.