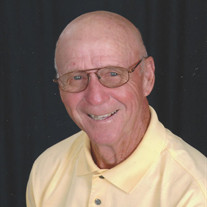 William "Larry" McKinney, 83, of Cape Girardeau, Missouri died Friday, February 4, 2022 at his home. He was born September 9, 1938 in Tuscaloosa, Alabama to William and Lena Ruth Butler McKinney. He and Carole Ann Urhahn were married April 12, 1959 in Cape Girardeau. Larry was a graduate of Cape Central High School where he played on the 1954 Championship baseball team. In 2019, he served as the assistant coach to Zack Walton for Jackson's 2019 MSHSAA Golf Championship. He was also a longtime golf instructor. He served in the Marines. He worked for Crites & Sailer Construction Co., operated Larry McKinney Cleaning Service and owned a full service car wash. He was a member of Lynwood Baptist Church. Survivors include his wife, Carole Ann McKinney of Cape Girardeau; son, Lance (Linda) McKinney of Jackson; daughter, Candis K. (John) Moxley of Cape Girardeau; sister, Barbara J. Neader of Cape Girardeau; four grandchildren, Connor (Will) Simmons of Cape Girardeau, Jake (Molly) Long of Jackson, Cole Moxley and Maegan (Jarrod) Pullen of Chaffee; five great-grandchildren, Olivia, Caroline and Ellie Morgan, Emilia Pullen and Hunter Moxley, all of Chaffee. He was preceded in death by his parents; and a brother, David. There will be no visitation. Funeral service will be at 11:00 am Thursday, February 10, 2022 at Lynwood Baptist Church in Cape Girardeau with the Rev. Mark Anderson officiating. Burial will be at Cape County Memorial Park Cemetery in Cape Girardeau. Graveside military rites will be provided by Missouri Honors Team. Memorial contributions may be given to Lynwood Christian Academy. Online condolences may be made at www.fordandsonsfuneralhome.com. Ford & Sons Funeral Home is in charge of arrangements.

The family of William Larry McKinney created this Life Tributes page to make it easy to share your memories.

Send flowers to the McKinney family.