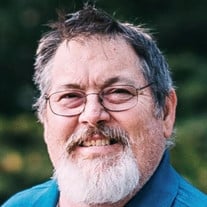 William David "Chug" Little, 67, of Cape Girardeau died Saturday, May 14, 2022 at his home. He was born December 19, 1954 in Nashville, Tennessee to Charles Edward and Bessie Waters Little. He and his wife, Debbie were married September 2, 2000 in Las Vegas, Nevada. He served in the Army from 1975 to 1978. He was a graduate of Chaffee High School. Chug worked at Rhodes Convenience Stores as a manager for 24 years. He loved spending time with his grandchildren-they were everything to him. He was a member of Cape First Church and Chaffee Elks Lodge #1810. Survivors include his wife, Debbie Little of Cape Girardeau; son, David (Ashley) Little of El Paso, Texas; stepson, Zach (Yoon) Groves of St. Louis; daughter, Beth DeHart of Cape Girardeau; four brothers, Tom Little of Oak Ridge, Missouri, Bobby (Martha) Little of Scott City, Roger Little of Cape Girardeau and Greg (Tracey) Little of Jackson; five sisters, Patricia Heimbach of Jackson, Donna (Richard) Schafer and Paula (Jim) Flanner of Marble Hill, Carol (Steven) McLemore of Jackson, and Wanda Little of St. Louis; seven grandchildren, Kaitlin, Austin, Ethan, Carter, Faith, Parker, and Evelyn; aunt, Mary Rosenberg of Jackson; and numerous nieces and nephews. He was preceded in death by his parents. Visitation will be from 4:00 pm to 8:00 pm on Monday, May 16, 2022 at Ford & Sons Mt. Auburn Chapel in Cape Girardeau. Funeral service will be at 10:00 am Tuesday, May 17, 2022 at the funeral home with the Rev. Chad Fisher officiating. Burial will be at Missouri Veterans Cemetery in Bloomfield with graveside military rites by Missouri Honors Team.

William David "Chug" Little, 67, of Cape Girardeau died Saturday, May 14, 2022 at his home. He was born December 19, 1954 in Nashville, Tennessee to Charles Edward and Bessie Waters Little. He and his wife, Debbie were married September... View Obituary & Service Information

The family of David "Chug" Little created this Life Tributes page to make it easy to share your memories.

Send flowers to the Little family.