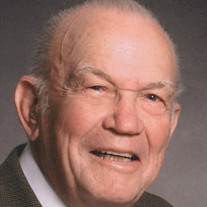 William J. "Bill" Gerecke, 95, of Cape Girardeau, Missouri died Friday, July 24, 2020 at his home. He was born January 30, 1925 in Gordonville, Missouri to Henry and Martha Lange Gerecke. Bill served in the Army in World War II in the sixth... View Obituary & Service Information

The family of William J. Gerecke created this Life Tributes page to make it easy to share your memories.

Send flowers to the Gerecke family.