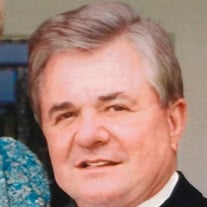 William Louis "Bill" Davis, 83, of Baton Rouge, Louisiana passed away peacefully Thursday, September 17, 2020 with Judy, his loving wife, at his side. Bill was born October 3, 1936 in Texarkana, AR to William Louis Davis, Sr. and Thelma Davis Stevens. Bill graduated from the University of Arkansas and majored in accounting. He was a member of Beta Alpha Psi National Honorary Association. He worked with the FBI for several years, LTV Aerospace Corporation (1964-1973) as Chief, United States Government Liaison and worked on the LTV contract for Dallas/Fort worth International Airport when it was being developed. He worked with the Department of Health, Education and Welfare in the Dallas regional office as Director of Fiscal Management for the Dallas Region which consisted of Texas, Oklahoma, New Mexico, Arkansas, and Louisiana. He headed the Fiscal Management Section in the Dallas Medical Regional Office as the Defense Compliance Auditor for the Department of Defense. Bill, Judy and children moved to Baton Rouge, Louisiana in 1977 when Bill was transferred to work as Resident Health Insurance Representative for the state of Louisiana with The Federal Medicare Program administered by private insurance companies under Federal Health Care Financing Administration (HCFA) guidelines. Bill retired and founded his own company, Health Care Financing Consultants Inc, (HCFC) and worked as a Medical Reimbursement Specialist for Medical Facilities and Physicians throughout many states. His wife, Judy, a Realtor, convinced him to slow down and stop traveling and consider joining her in the real estate industry. He agreed and successfully developed several subdivisions. Bill reached out to younger people and assisted and encouraged them to start their own businesses. Bill will be missed by many. Survivors include his wife, Judith Anderson Davis; daughter, Elizabeth "Lisa" Davis; son, John Louis Davis, Sr. and his wife, Vicki Kling Davis, whom Bill loved dearly. He is also survived by three grandchildren, Natalie G. (Tony) Wright, John Louis Davis Jr., and Joseph A. Davis. He adored and spent as much time as possible with his grandchildren and family. He is also survived by his brother, John Robert (Susan) Davis and a very special brother-in-law, Bill Anderson. He is also survived by many nieces and nephews, John D. Anderson II, Michael, Dianne, Susan, John Ray, Lydia, Lynda, Jimmy, Stephen, Rebecca, and numerous great nieces and nephews. He is also survived by his god son, Jay Young of Tulsa, Oklahoma. He was preceded in death by his parents. Visitation will be 10:30 am to 11:30 am Monday, September 28, 2020 at Ford and Sons Funeral Home, 1001 N. Mt. Auburn Road, Cape Girardeau, Missouri 63701. Memorial service will follow at 11:30 am Monday at the funeral home, with the Rev. Eric McGruder officiating and music conducted by Susan Anderson Bell. A lunch reception will follow at Dexter BBQ, 236 S. Broadview St., Cape Girardeau, Missouri 63703. Casual attire preferred. The family would like to thank Missouri Delta Hospice and especially Vickie Shands and Moriah Ledbetter. Bill loved them for giving him such wonderful care. Also a special thanks to Natalie and Tony Wright (grandchildren) for their loving care for their grandfather. Bill's ashes will be spread on a hill on the family farm in Southeastern Oklahoma by his family at a later date. In lieu of flowers, memorial contributions may be given to a charity of your choice. The family invites you to share your thoughts and memories at www.fordandsonsfuneralhome.com. Ford and Sons Funeral Home - Mt. Auburn is in charge of arrangements.

The family of William Davis Jr. created this Life Tributes page to make it easy to share your memories.