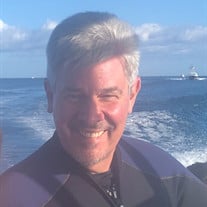 William Pontious Browne, 62, of Cape Girardeau, Missouri died unexpectedly on February 1, 2022 while vacationing in Cozumel, Mexico. Will was born on April 11, 1959 in Norfolk, Virginia to John Latty and Billie Elizabeth Moore Browne, the fourth of five children. The son of a marine corps aviator, he spent his early years moving frequently. He attended grade school in Coronado, CA before relocating to northern Missouri after his father's retirement from service in 1971. He graduated from Green City High School in 1977 and attended the University of Missouri in Columbia where he was a member of Alpha Gamma Rho. He graduated from the College of Agriculture with a Bachelor of Science in Agricultural Economics in 1982. He and Nancy Lee Hatley were married on August 8, 1981 at Immaculate Conception Catholic Church in New Madrid, Missouri. He spent his career in flooring sales and technical support, working the last seven years as a Regional Manager for the Central States Region for Basic Coatings, a division of Betco Corporation. He was a Lifetime Member of the Mizzou Alumni Association and a passionate Mizzou football and basketball fan. He enjoyed renovating/remodeling houses and did everything from plumbing and electrical to laying tile and hardwood floors. He loved spending weekends boating at Kentucky Lake but his favorite hobby was scuba diving and underwater photography while diving. He is survived by his wife, Nancy, and three sons, William Browne, Jr. of Crested Butte, CO; Conrad Browne and Parker Browne of Columbia, MO; a brother, John L. (Deb) Browne, III of Cape Girardeau; two sisters, seven nieces and nephews and eight great-nieces and nephews. He was preceded in death by his parents and one sister. Visitation will be held at Ford and Sons on Mt. Auburn in Cape Girardeau from 4:00 pm to 7:00 pm on Friday, March 25, 2022. A memorial service/celebration of life will be held at Ford and Sons at 10 AM on Saturday, March 26, 2022. The family requests that in lieu of flowers, donations be made in Will's name to the American Heart Association, Coral Reef Alliance or Mizzou Alumni Association Heartland Chapter Scholarship Fund. Online condolences may be made at www.fordandsonsfuneralhome.com.

The family of Will Browne created this Life Tributes page to make it easy to share your memories.

Send flowers to the Browne family.