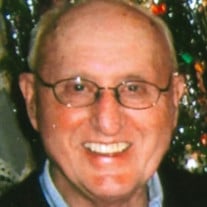 Dr. Willard J. Morgan, 91, of Cape Girardeau, Missouri died Saturday, May 1, 2021 at St. Francis Medical Center in Cape Girardeau. He was born August 19, 1929 in Beecher, Illinois to Robert and Carolyn Schultz Morgan. He and Diane Biddison were married June 20, 1954 in Newcastle, Wyoming. A graduate of Crete Community High School in Crete, Illinois, where he was the first four sport athlete in the school's history and captain of the school's first football team. Dr. Morgan earned his bachelor's degree from the University of Wisconsin - River Falls. He lettered in football and baseball. Both his master's degree and his doctorate were earned at the University of Wyoming. His professional career began in 1951 when he became a high school teacher and athletic director in Newcastle, Wyoming. In 1956 he became the youngest principal in the state of Wyoming when he was named to head the Newcastle High School. After serving as a graduate assistant at the University of Wyoming, he was appointed to the faculty of New Mexico Western University where he was both a teacher and supervisor of student teachers. He had a similar position at the University of Denver before coming to Southeast Missouri State University. He joined the faculty of Southeast Missouri State University in 1963. During his tenure of 28 years, he served in many roles. Some of which were: Dean of Continuing Education, Coordinator of Student Teaching, Professor of Educational Administration, Director of School Services, Director of Summer Sessions and Coordinator of the Specialist Program. Under his leadership, various programs that were unique in the region, state or nation were conducted. Many of those required special funding, his proposals resulted in over $2,000,000 for the university and the public schools of the area. He was well-respected throughout the area and state, he received many honors. He was the recipient of the First Service to Secondary Education award presented by the Missouri Association of Secondary Principals. He also received the Distinguished Service to Education award given by the North Central Association of Colleges and Secondary Schools. Dr. Morgan was appointed to membership on the National Association of Secondary School Principals Committee of Professors of Secondary School Administration and Supervisors. He was the only faculty member of Southeast Missouri State University to be selected as a member of this prestigious committee. Willard enjoyed his retirement of 28 years concentrating on traveling, fishing and lawn art, which resulted in three landscaping awards. He caught 269 bill fish including an 822 pound blue marlin caught off the Azores. He was a member of Grace United Methodist Church. Survivors include his devoted wife of 66 years, Diane Morgan of Cape Girardeau; his son, Craig (Rhonda) Morgan of Marco Island, Florida; two daughters, Lori (James) Zimmer of Cape Girardeau and Tracie (David) Feuerhahn of St. Louis, Missouri; seven grandchildren, Craig Morgan II, Margaret and Mark Zimmer, Morgan (Jim) Barry, Catherine (Stephen) Zsigray, Audrey (Andrew) Guerra and Noah Lucas; and five great-grandchildren, James and Edward Barry, Stephen, Caroline and Allie Zsigray. He was preceded in death by his parents; two brothers, Thomas and Robert Morgan; and a grandson, Michael Zimmer. Dr. Morgan served in the Army during the Korean Conflict. After separation, he served in the Wyoming National Guard and the active reserves and was honorably discharged as a Captain in 1968. Visitation will be 12:15 pm to 1:00 pm on Saturday, May 8, 2021 at Grace United Methodist Church in Cape Girardeau. Funeral service will follow at 1:00 pm Saturday at the church with the Rev. Eric Schmidt officiating. Burial will be at Missouri State Veterans Cemetery in Bloomfield, Missouri at a later date. In lieu of flowers, memorial contributions may be given to Grace United Methodist Church, 521 Caruthers Ave., Cape Girardeau, MO 63701, Dr. Willard J. Morgan and Dr. Craig M. Morgan Graduate Studies Endowed Scholarship at Southeast Missouri State University, One University Plaza, Cape Girardeau, MO 63701 or a charity of choice. Online condolences may be made at www.fordandsonsfuneralhome.com. Ford and Sons Funeral Home - Mt. Auburn is in charge of arrangements.

The family of Willard Morgan created this Life Tributes page to make it easy to share your memories.

Send flowers to the Morgan family.