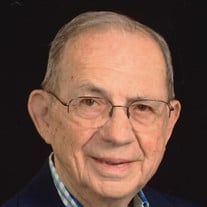 Dr. Wayne Franklin Ewbank, 86, died on August 7, 2020 when he peacefully slipped into the arms of Jesus after a long struggle with heart and kidney failure. Wayne was born on February 4, 1934 in Ludlow, IL to the parents of Lloyd Francis Ewbank and Lela Sarah Edington Ewbank. He was the middle child of nine siblings. He grew up on a small farm where his love for agriculture started. Wayne had a love for education and learning. He graduated from Martinsville High School in Martinsville, IL. He went on to pursue three college degrees earning a B.S in Agriculture from the University of IL, an M.S in Agricultural Economics from Southern IL University and a Ph.D in Agricultural Economics from University of KY. Wayne launched his teaching career as a college professor at Southeast Missouri State University where he taught economics for 33 years. During his tenure, he at one time served as the Department Head for Social Sciences. When asked once if teaching the same subject over and over ever got boring, he smiled and responded, “I suppose it would if I taught a subject, but I teach students and everyone of them is different.” Wayne married Linda Fae Behner on June 23, 1962. Wayne and Linda moved to Cape Girardeau, MO in 1964 where they built a home centered on God and love, raising two children. They celebrated 58 years of marriage in June. Wayne devoted his life to his family and friends. He was a gentle and kind Christian man committed to creating a safe home where one could learn, grow and seek all that God could enable. He was an encourager and had a great sense of humor, always having a quick twinkle in the eye and smile on his face as he delivered his witty comments. In addition to teaching, Wayne was a faithful servant to the Lord by serving as a deacon and a finance committee member for his church. In addition to his parents, Wayne was preceded in death by his brother Richard Ewbank and three sisters, Evelyn Ewbank Melton, Mary Jo Ewbank Stogstill, and Lela Belle Ewbank Clapp. He is survived by his wife, Linda, his daughter, Susanne (Ewbank) Jackson and her husband Charles of Hendersonville, TN; his son Kevin Ewbank and his wife, Luan, of McKinney, TX; four grandchildren, Kaysie (Jackson) Williams and her husband, Joseph of Gallatin, TN, Brendan Ewbank of Frisco, TX, Emmalee (Ewbank) Webb and her husband, Patrick of McKinney, TX and Matthew Jackson, of Hendersonville, TN; four siblings – Lois Smith of Marshall, IL, Carol Ann (Evan) Lycan of Marshall, IL, Darrell (Carolyn) Ewbank, Murphysboro, IL, and Karen (Darrell) Propst of Terre Haute, IN along with many nieces and nephews. Visitation will be Friday, August 28, 2020 from noon until 1:00 p.m. at Lynwood Baptist Church, Cape Girardeau. Funeral service will follow at 1:00 p.m. at the church with Rev. Mark Anderson officiating. A second visitation will be Saturday, August 29, 2020 from 11:00 a.m. until noon at Clarksville Baptist Church in Marshall, Illinois. Funeral service will follow at noon. Burial will be in the Clarksville Baptist Church cemetery. In lieu of flowers, donations may be made to the Lynwood Christian Academy or the Wayne Ewbank Endowed Scholarship at SEMO University.

Dr. Wayne Franklin Ewbank, 86, died on August 7, 2020 when he peacefully slipped into the arms of Jesus after a long struggle with heart and kidney failure. Wayne was born on February 4, 1934 in Ludlow, IL to the parents of Lloyd Francis Ewbank... View Obituary & Service Information

The family of Dr. Wayne Franklin Ewbank created this Life Tributes page to make it easy to share your memories.

Send flowers to the Ewbank family.