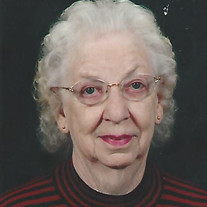 Wanda Hopper Grim, 93, died Saturday, September 5, 2020 at Auburn Creek Assisted Living in Cape Girardeau, She was born September 7, 1926 at home to Frank and May Hopper of Cape Girardeau. At age 15 she met her best friend and love of her life, Orville Grim. Two years later they were married on January 10, 1944. Survivors include four children, James and Martha Grim, Sr., of Parker, Texas; Janice Renee Copeland of Cape Girardeau; Jay Grim of Cape Girardeau; and a foster daughter, Linda Stapleton of Fenton, Missouri; seven grandchildren, Jason Copeland, James Grim, Jr. and Robert Grim, Dustin and Miranda Grim and Roxann Haynes and Derek Stapleton; three great-grandchildren, Marissa Wilcut, Alix Copeland, and Nathan Huskey; one sister, Martha Bertrand of Cape Girardeau; one brother, Harvey Hopper of Paducah, Kentucky; and several nieces and nephews. Orville was a military man and would move frequently when he changed duty stations. As a result, when he would go to a new station she would follow. During their long marriage they moved 50+ times Wanda was a member of the Hobbs Chapel United Methodist Church where she once served as a Sunday School teacher and a Sunday School secretary for 30 years. She was a past member of the UMW. While living in Columbus, Georgia, she worked for the American Red Cross. She had been a nurse at Southeast Missouri Hospital and Cape LaCroix Nursing Home. She and Orville started the Senior Citizens Club at Ford D in Cape Girardeau in 1964. Wanda made many friends during her long life. One of those very special close to your heart friends was Joyce Farrow. Joyce was someone who understood her ups and downs in a way few people could, She was truly glad for her and was there to listen when when there was something new to tell. She was also by her side when there was mischief to be had. Joyce was that "call on me any time for any purpose" friend from grade school until Wanda's death. Orville made his final journey to be with his heavenly father on October 3, 2003. The family believes he came back for a moment to take Wanda home for her final move on September 5, 2020. A graveside service will be held at 11:00 am, Monday, September 7, 2020 at Hobbs Chapel Cemetery in Cape Girardeau with the Rev. Janet Hopkins officiating.

Wanda Hopper Grim, 93, died Saturday, September 5, 2020 at Auburn Creek Assisted Living in Cape Girardeau, She was born September 7, 1926 at home to Frank and May Hopper of Cape Girardeau. At age 15 she met her best friend and love of her life,... View Obituary & Service Information

The family of Wanda Grim created this Life Tributes page to make it easy to share your memories.

Send flowers to the Grim family.