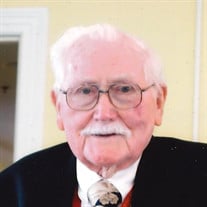 Walter James “Buddy” Wright, 95, of Cape Girardeau passed away Thursday, Feb. 10, 2022, at Chateau Girardeau. He was born July 6, 1926, in Blytheville, Arkansas, to Walter Samuel Wright and Bronical Pankey. Buddy joined the Marine Corps when he was 16 years old. He served in the 4th Marine Division, L Company, 3rd Battalion during World War II. Buddy served in the battles of Tinian, Saipan, Kwajalein (Roi-Namur) and Iwo Jima. He was present when the flag was raised at Iwo Jima. He was very proud of his service to his country. After his three years in the service, he got his GED and attended Southeast Missouri State University. He and Wanda Smart were married Feb. 12, 1950, in Greenway, Arkansas. He then went on to own and operate Wright Electrical Contracting and Wright Properties. He was a member of Centenary United Methodist Church. Buddy is survived by his wife, Wanda, of Cape Girardeau; siblings, Don (Peggy) Wright of St. Louis; Sammye (Bill) Ratliff of Arnold, Missouri; Nellie Sanders of Memphis, Tennessee; Leola Rebstock of Kennett, Missouri, Patricia (Bill) Causey of Sikeston, Missouri; and Jodi (Doug) Nesslein and Gordon (Sheila) Wright, both of Cape Girardeau; numerous nieces, nephews, great-nieces and great-nephews. He was preceded in death by his father; mother; stepmother, Maudie Wright; daughter, Deborah Wright; brother, Frank Wright; and sisters, Charlene Scroggins and Billy Van Fulgham. Visitation will be from 5:30 until 8 p.m. Monday, Feb. 14, 2022 at Ford and Sons Mount Auburn Funeral Home. Funeral service will be at 1 p.m. Tuesday, Feb, 15, 2022 at the funeral home. Burial with full military honors will follow at Cape County Memorial Park Cemetery.

The family of Walter James "Buddy" Wright created this Life Tributes page to make it easy to share your memories.

Send flowers to the Wright family.