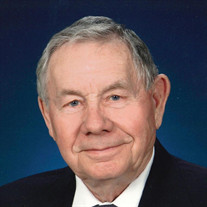 Vincent Eberhardt Seyer was born Dec. 18, 1929, to Joseph J. and Pauline (Dohogne) Seyer, in Cape Girardeau, where he lived his entire life. He was the 10th of 12 children, and the last of his siblings to survive. He passed peacefully Sunday, Dec. 13, 2020, from complications caused by cancer. He was five days shy of his 91st birthday. In 1951, he married Alberta “Bertie” Proffer. They had three children. Bertie died in June 1991. Vince re-married in 2006 to Louise Smith Shaver. They resided for the past 13 years at Saxony Village in Cape. Louise was by his side when he passed. Vince served his country in the U.S. Navy, including eight years in the Naval Reserve as a Seabee Reserve. He was honorably discharged in November 1958. In 1949, Vince began his 43-year tenure at Southeast Missouri State University (then Teachers College), where he worked in various capacities, including apprentice carpenter, occasional bus driver (for its men’s athletic teams), general foreman and superintendent of building and grounds. He served as SEMO’s director of the physical plant during his last 17 years, until his retirement in 1992. He was very active in several professional organizations, including the Association of Physical Plant Administrators and the related Central States Regional Association. He traveled the country for professional meetings and presented at a national conference on fluidized bed combustion in Washington, D.C., in 1988. He attended St. Mary’s Cathedral in his younger years and St. Vincent de Paul Catholic Church for the remainder. He served on St. Vincent’s Parish Council, including as president, and was active in parish construction and expansion programs. For over 20 years, he participated in the men’s Cursillo movement. Vince was an avid volunteer, especially after his retirement from SEMO. He served nine years on the Cape Girardeau Public Library Board of Directors, the last three years as its president. He was a charter member of the SEMO Foundation. He was active in the multi-denominational FISH Pantry organization for many years, the last year as its president, and at that time, the first non-minister president. Other volunteer activities included the American Red Cross, Rotary International, the Senior Center, Knights of Columbus, Meals on Wheels, Jefferson School and Heartland Industries, where he served for many years on its board of directors. He spent countless hours volunteering at Saint Francis Medical Center, for which he received the Vernice Baumstark Award in 2005. He was also a regular blood platelet donor well into his elder years. Perhaps most notably, beginning at age 70, and for nearly 20 years thereafter, Vince began his second “career” as a musical entertainer at local nursing homes, the Missouri Veterans Home and other venues. Besides music, singing and playing the piano, he enjoyed gardening and growing prized hybrid tomatoes, though he disliked tomatoes. Survivors include his wife, Louise Seyer; three children, Connie Lynn Hess of Springfield, Illinois; David Vincent (Staci) Seyer of Phoenix, Arizona; and Kathy Elaine (Jeff) Sutterfield of Phoenix; three grandchildren, Chad (Lauren) Heuschober of New York City, New York; Gail (Dave) Johnson of Springfield, Illinois; and Jill (Eddie) Schuele of St. Louis; four great-grandchildren, Leah, Sydney, Mark and Dylan; three sisters-in-law, Dorothy Seyer of Jackson, Frieda Seyer of Cape and Clara Snover of Fenton, Missouri; and, by marriage, stepson, Greg (Donna) Shaver of Jackson and their two daughters, Lindsay Chapman of Jackson and Amy (Jay) Cox of Sikeston, Missouri, and their four grandchildren. Eliott, Lily, Emma and James IV. Vince was preceded in death by his parents; his wife, Bertie Seyer; his sisters, Leona “Adelma”, Wilma “Clovis”, Irma Lappe and Delphine “Teenie” Longinette; his brothers, Mark, Oscar, Clarence, James, Francis and Joseph Seyer. He also had a younger brother, Thomas, who died as an infant. Because of the pandemic, the family is deferring a celebration of life service until a later time, when family and friends can gather safely. When the date and location in Cape Girardeau are determined, notice will be published in the Southeast Missourian obituary section. Family and friends are encouraged to check the Ford and Sons Funeral Home website for updated information or to contact them directly. Vince will be laid to rest in the Cape County Memorial Park Mausoleum. Tax-deductible memorial contributions may be made to SEMO’s Vince and Alberta Seyer (Memorial) Scholarship Fund, the American Cancer Society or to the GoFundMe website (search “Lonnie McClard’s fight against Neuroblastoma”). (Lonnie Rae is Vince’s sister-in-law Clara’s 1-year-old great-granddaughter, who is battling a very rare form of childhood cancer.)

Vincent Eberhardt Seyer was born Dec. 18, 1929, to Joseph J. and Pauline (Dohogne) Seyer, in Cape Girardeau, where he lived his entire life. He was the 10th of 12 children, and the last of his siblings to survive. He passed peacefully Sunday,... View Obituary & Service Information

The family of Vincent Eberhardt Seyer created this Life Tributes page to make it easy to share your memories.

Send flowers to the Seyer family.