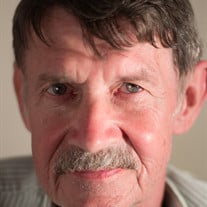 Valdis Imants Zalite, 71, of Cape Girardeau, Missouri died Monday, March 14, 2022 at the home of his son. He was born December 3, 1950 in Germany to Richard and Emma Gaida Zalite. He served in the Air Force during the Vietnam War and after a career in the service, he retired as a Master Sergeant. He had been honored by the Wake Foundation, a Missouri Veterans organization for his service to our country. He was a member of Hanover Lutheran Church. He loved to fish, put models together, buy scratcher tickets, bowl, hunt and shoot, talk on the phone and fix everything, since he was good with his hands and was very mechanical. He also liked listening to YouTube videos way too loud. He was a huge Dallas Cowboys fan. He loved his kiddos and grandkids. He especially loved playing iPhone darts with Espy, asking his buddy, Lillie for help in his room and playing cards, requesting his treats to be picked up by Ali, and grabbing a high five or handshake from Valdi. Survivors include four children, Chrissy Zalite of Chapel Hill, North Carolina, Valdi (Martha) Zalite of Cape Girardeau, P.J. (Aaron) Keplinger of Omaha, Nebraska; and Berry (Stacy) Langley of Elizabeth City, North Carolina; special person, Lexi Wallace of Piggott, Arkansas; brother, Dr. David (Rocky) Moore of Pleasant View, Tennessee; four sisters, Rasma (Steve) Wiginton of Austin, Texas, Ilga (Terry) Martin of Springfield, Tennessee, Ginger (Steve) Lacy of Wilsonville, Oregon, and Mary (Scott) Seaton of Bourbonnais, Illinois; grandchildren, Espy, Riley, Ali, Valdi, Livi, Lillie, and Ava. He was preceded in death by his parents and two brothers, Richie and John Zalite. Visitation will be 9:00 am to 10:00 am on Saturday, March 19, 2022 at Hanover Lutheran Church in Cape Girardeau. Funeral service will be at 10:00 am Saturday, March 19, 2022 at Hanover Lutheran Church with the Rev. Rod Benkendorf officiating. Burial will be at Hanover Lutheran Church Cemetery in Cape Girardeau with graveside military rites by Missouri Honors Team. Memorial contributions may be given to Hanover Lutheran Church.

Valdis Imants Zalite, 71, of Cape Girardeau, Missouri died Monday, March 14, 2022 at the home of his son. He was born December 3, 1950 in Germany to Richard and Emma Gaida Zalite. He served in the Air Force during the Vietnam War and after... View Obituary & Service Information

The family of Valdis Imants Zalite created this Life Tributes page to make it easy to share your memories.

Send flowers to the Zalite family.