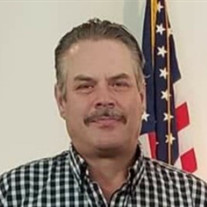 Timothy Morris Seabaugh, 54, of Daisy, Missouri died Sunday, October 18, 2020 at his home. He was born December 2, 1965 in Cape Girardeau to Lonnie P. and Roberta M. Seabaugh, Tim was the second of three sons. Growing up Tim learned early the value of hard work and the benefits that effort brought. Helping on the family farm and with neighbors he developed his strong work ethic. In school at Oak Ridge R6, Tim, his best buddies Wes and Steve kept the teachers on their toes. High school brought the opportunity to participate in basketball and baseball. Tim excelled at both and often shared stories of those games with friends and his two daughters. Later in life Tim shared his love of both sports with the children of the Oak Ridge Athletic Association by coaching t-ball and coach pitch baseball and a girls basketball team in Jackson. Some of his favorite summer memories were associated with these endeavors. Tim discovered his love of music in high school while playing the saxophone under the patient teaching of Judy Sharp and continued that interest for many years when he became a DJ with Manassa Galaxy Sound Systems, which he and his wife later took over and ran until his passing. Being a DJ took him to a long period of employment with the Purple Crackle. There he made many friends among the staff and patronage and this was where he and his wife eventually met. Throughout his life Tim also was employed at TGMO, Oak Ridge R6 Schools, and Southeast Lumber Co. His final position was one he enjoyed greatly, being a delivery driver for Prairie Farms. He took great joy in delivering milk to area schools and senior care facilities and made many friends among those he served and worked with. Tim was a life long member of New Salem UMC in Daisy. This church saw his marriage to Beth in 1994, the birth of both daughters, Bailey and Samantha and his grandson, Kody. Tim had a strong, deep seeded faith. He didn't thump a Bible but when you spoke with him you knew that Jesus was his savior and that his strong faith carried him through his life. Tim was a guy who, if needed would do whatever he could to help. He spent many days assisting the youth group of New Salem in fundraising efforts, and by offering DJ services for their events. Tim was always ready and willing to donate his services as a DJ for any fundraising benefit. Countless individuals were supported through those events. His rich baritone voice filled the sanctuary at New Salem with both solo and choral praise throughout his life. Tim's greatest joys were his beautiful daughters Bailey and Samantha who he loved fiercely. However, Tim learned a whole new level of love with the birth in 2019 of his grandson Kody. "Stud Boy" as Tim called him was always able to put a smile on Tim's face and a twinkle in his eye. God knew that this little boy would be needed and that the joy of being grandparents should be shared so He sent Kody to Bailey to share with the family. Tim was a lifelong Saint Louis Cardinals fan and hater of the Cubs. Amazing memories were made watching Cardinals games at home and at the ballpark. Tim loved Bugs Bunny and Looney Tunes cartoons which is evidenced by his extensive collection and "museum". He loved to take people on tours and see their amazement at the number of items he carefully curated. Beth even had an ice sculpture of Bugs Bunny at their wedding and his Purple Crackle friends gave the newlyweds Looney Tunes Fiesta Ware dishes as their wedding china. Tim loved to work outside whether in the family garden with his dad or cutting wood. Many of his favorite memories revolved around these two activities and some of his strongest friendships were bonded in the dirt or while the chainsaws whined. Esophageal cancer took many things from Tim, but it could not touch the love he held for family and dear friends, or his deep faith. Tim was proceeded in death by his father, Lonnie; his grandparents; and "the best little black pug dog ever" Muggsie. He is survived by his "ever patient" and loving wife, Beth; his daughters, Bailey and Samantha; grandson, Kody; mother, Roberta (Martin) Allen; brothers, Greg (Paula) and Brian (Tina); nephews and nieces, Brandon, Tanner, Paige, Jacob, Jarrett and Katie; and aunts, uncles and cousins. He is deeply loved, fiercely missed, and forever free now! Thank you all for being part of his story! And, as his lifelong friend and boyhood idol Porky Pig would say "Th-th-th-that's all folks!!" Visitation will be 4:00 pm to 8:00 pm on Friday, October 23, 2020 at Ford and Sons Funeral Home in Jackson. Funeral services will be 10:00 am Saturday, October 24, 2020 at the funeral home in Jackson with the Revs. Steven Koerner and Kathleen Moran officiating. Memorial contributions can be given to his grandson, Kody or Avenue of Flags, 1049 N. Kingshighway, Cape Girardeau, MO 63701. Ford and Sons Funeral Home - Jackson is in charge of arrangements.

The family of Timothy Morris Seabaugh created this Life Tributes page to make it easy to share your memories.

Send flowers to the Seabaugh family.