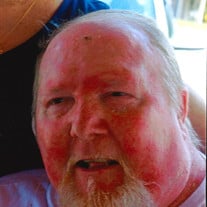 Timothy Joseph Bender was born on February 4, 1946 and lost a valiant battle with Multiple Sclerosis for the last 33 years passing to God's Eternal Kingdom on November 12, 2020 from the COVID-19 virus, due to preexisting conditions. Tim served in the United State Army as military police. He was stationed in Vietnam, when President Johnson was there and then sent to Thailand to escort the King and Queen of Thailand and various dignitaries. He worked as an electrician for Fru-Con for several years, but also worked on his own restoring Historical properties and had a great respect fro older homes that he ever worked with. Tim has two daughters from a previous marriage, Tracy Christine (Kevin F.) Fober and Angie (Shannon Y.) Bender Davis. Tim or "Timmy" (as his close friends called him) married Brenda Kay Ellis on February 27, 1982. The two left several months later to Florida to sail and to island hop for several weeks with his brother, Steve Bender (passed due to complications of MS), and his new bride. He is survived by his wife of 38 years, Brenda Kay Ellis Bender; his daughter, Tracy C. (Kevin F.) Bender Fober and youngest daughter, Angie (Shannon Y.) Bender Davis; a sister, Nancy Bender Richards of Valicro, Florida; four grandchildren, Graeme, Emery, Carson and Temperance Davis; along with several nieces and nephews spread across the country. He is preceded in death by his parents, Arthur H. and Mary Jo Yope Bender; and a brother, Stephen Bender. Visitation will be 10:00 am to 11:00 am Tuesday, November 17, 2020 at Trinity Lutheran Church in Cape Girardeau. Funeral service will follow at 11:00 am Tuesday at the church with the Rev. Douglas Breite officiating. Masks and social distancing is required. Burial will be at Fairmont Cemetery in Cape Girardeau. In lieu of flowers, memorial donations can be made to Multiple Sclerosis Society, 12125 Woodcrest Executive Drive, Ste. 320, Saint Louis, MO 63141 or Crown Hospice, 2858 Professional Ct., Cape Girardeau, MO 63703. Online condolences may be made at www.fordandsonsfuneralhome.com.

Timothy Joseph Bender was born on February 4, 1946 and lost a valiant battle with Multiple Sclerosis for the last 33 years passing to God's Eternal Kingdom on November 12, 2020 from the COVID-19 virus, due to preexisting conditions. Tim served... View Obituary & Service Information

The family of Timothy Bender created this Life Tributes page to make it easy to share your memories.

Send flowers to the Bender family.