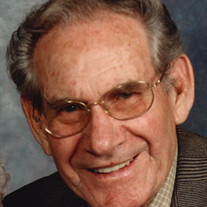 Thomas Olin Ross, Sr. 94, of Cape Girardeau, Missouri, passed away Thursday, November 26, 2020, at The Lutheran Home in Cape Girardeau, Missouri. Thomas was born January 2, 1926, in Puxico, Mo., to Arthur R. Ross and Bessie M. Johnson. He married Betty Mae Richardson on May 12, 1946. She preceded him in death October 3, 2019. Thomas was a World War II Navy veteran. He was a Chief Engineer on many vessels on the upper and lower Mississippi River. He also served as port engineer for the Upper Mississippi Towing Company. He was a charter member of Bethel Assembly of God Church in Cape Girardeau. He is survived by daughter, Linda Schorie, of Cape Girardeau, son, Thomas O. (Nancy) Ross, Jr. of St. Louis, and daughter, Beth (David) Scherer of Cape Girardeau. Grandchildren, Jeff (Jamie) Mayfield and children Zak and Zoë, and Gina Ross Henry and her daughter Lauren of St. Louis. He is also survived by a brother-in law Tom (Connie) Richardson, and many nieces and nephews. He was preceded in death by his parents, brothers Billy and Paul, a sister, Florence Ross James, and her daughter, Twylla, and a son-in-law, John Schorie. The family wishes to extend their gratitude to all the employees at The Lutheran Home for their care and support. There will be a private ceremony with military rites. Entombment will be at Cape County Memorial Park in Cape Girardeau. In lieu of flowers, memorial contributions may be made to Missouri's National Veterans Memorial, 1172 Veterans Memorial Pkwy, Perryville, MO 63775.

The family of Thomas O. Ross created this Life Tributes page to make it easy to share your memories.

Send flowers to the Ross family.