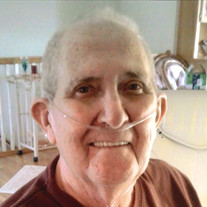 Terrence Leo Howell, 80, of Jackson, Missouri died Thursday, July 15, 2021 at his home. He was born November 3, 1940 in Rockview, Missouri to Leo Arley and Wilma Elizabeth Jennings Howell. He and Martha James were married January 22, 1971 at Jackson, Missouri. He was an engineer with Cotton Belt Railroad, later Southern Pacific, retiring after 40 years, and was a member of the Elk's Lodge in Jackson and Masonic Lodge in Cape Girardeau. Terry loved hunting, fishing, golf, SEMO basketball, and raised race horses with his friend. Survivors include his wife, Martha Howell of Jackson; two sons, Kirk M. (Jo) Howell and Kent M. (Helene) Howell both of Mt. Juliet, Tennessee; a daughter, Melanie E. Powers of Vermont; one son in love, Isaac J. Powers; two brothers in Law, Chandler A. James and Douglas A. James; 11 grandchildren; and four great-grandchildren. He was preceded in death by his parents and one grandchild. Visitation will be 10:00 am to 11:00 am on Saturday, August 7, 2021 at Ford and Sons Funeral Home in Jackson. Memorial Service will follow at 11:00 am Saturday at the funeral home with the Rev. Donny Ford officiating. Memorial contributions may be given to the Children's Miracle Network or St. Jude's Children's Research Hospital. Online condolences may be made at www.fordandsonsfuneralhome.com. Ford and Sons Funeral Home - Jackson is in charge of arrangements.

The family of Terrence Leo Howell created this Life Tributes page to make it easy to share your memories.

Send flowers to the Howell family.