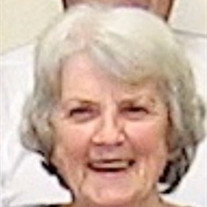 Shirley J. Huffman Sessoms, 86, died peacefully on Thursday April 29, 2021 at the Lutheran Home in Cape Girardeau, Missouri. Shirley was born on January 11, 1935 in Nashville Tennessee, the youngest of four children born to Hartwell Franklin and Mable Gallagher Huffman. She graduated from the all-girls Cathedral High School in 1953, having been both a finalist for Miss Nashville, and having beat out the boys for best baseball player in the city. Shirley volunteered extensively in Cape Girardeau, for Meals on Wheels, the Girl and Boy Scouts, and at Southeast Hospital's Auxiliary where she helped found the Cardiac Library. Later she worked for Francine Seier at Francine's Flowers, and subsequently managed the Cape Girardeau Scout Shop for many years until her retirement. Survivors include two children, Deidre Sessoms (David DeNuzzo) of Sacramento, California, and Hank Sessoms (Shannon) of Cape Girardeau. She is also survived by three grandsons, Alexander DeNuzzo, Jace DeNuzzo, and Trey Sessoms, in addition to many beloved nieces, nephews, grandnieces, grandnephews, and her sister-in-law Pat Huffman. Shirley was predeceased by her parents, a sister Virginia "Diddy" Cox (Donald), and two brothers, Frankie (Louetta) Huffman and Russell Huffman. Visitation will be from 3:00 pm to 5:00 pm Sunday at Ford and Sons Mt. Auburn Funeral Home in Cape Girardeau. Inurnment will be at Calvary Cemetery in Nashville, Tennessee at a later date. Memorials may be given to the charity of choice. Ford and Sons Funeral Home is in charge of arrangements. Online condolences may be made at www.fordandsonsfuneralhome.com

The family of Shirley Joann Sessoms created this Life Tributes page to make it easy to share your memories.

Send flowers to the Sessoms family.