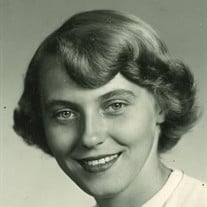 Shirley LaDonne Penrod, 85, of Cape Girardeau, Missouri went to her Heavenly home Monday, August 3, 2020 at Heartland Care and Rehab. She was born December 19, 1934 in Cape Girardeau to Emry Earl and Zula Beatrice Grayum Stovall. Shirley was a 1953 graduate of Central High School, where she was a majorette in the marching band. She loved to reminisce about the glory days and remained a football fan her entire life. She was also a dreamer and enjoyed song and dance. She met her former husband, Jerry Penrod, at Central High, where he was a football player. She married at the age of 21. The couple moved to Norfolk, Virginia for his stent in the U.S. Navy and then returned to the area for a short time. They ended up settling in St. Louis. Shirley had a gift for gab and was a top salesperson for Montgomery Wards. She held other retail positions in between being a homemaker and having two children, who were born eight years apart. Shirley loved cooking, decorating, doing crafts and spending time with her children. She loved the outdoors, sunbathing, swimming, waterskiing and an occasional trip to the beach. In 1976 she returned to Cape Girardeau to be near her parents. She was of the Christian faith. Loving survivors include her daughter, Karen L. Penrod of Cape Girardeau; son, Keith (Kim) Penrod of DeSoto, Missouri; four grandchildren, Whitney, Cody, Emili and April; and five great-grandchildren. She was preceded in death by her parents; sister, LaWanna Brown; and brother, Joyce E. Stovall. Visitation will be 10:00 am to 11:00 am Friday, August 7, 2020 at Ford & Sons Mt. Auburn Funeral Home in Cape Girardeau. Graveside service will follow at 11:00 am Friday at Cape County Memorial Park Cemetery in Cape Girardeau. Memorial contributions may be given to a charity of choice. Online condolences may be made at www.fordandsonsfuneralhome.com. Ford & Sons Funeral Home is in charge of arrangements.

The family of Shirley LaDonne Penrod created this Life Tributes page to make it easy to share your memories.

Send flowers to the Penrod family.