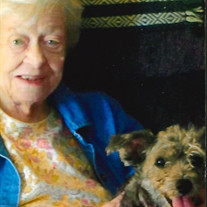 Shirley Shirlene Ellis Riley, 92, of Cape Girardeau, Missouri, passed away Saturday, March, 20, 2021 at her home. She was born December 11, 1928 in Sikeston, Missouri to Oren Otho and Rosa Mae Simmons Ellis. She and Marshall F. Riley were... View Obituary & Service Information

The family of Shirlene Riley created this Life Tributes page to make it easy to share your memories.

Send flowers to the Riley family.