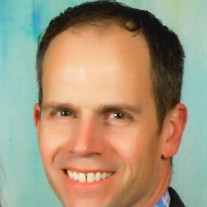 Shawn Aaron Downs passed away very peacefully on Wednesday, March 9, 2022 in Cape Girardeau. He fought a courageous battle with Glioblastoma cancer. Shawn was born February 16, 1973 in Springfield, Illinois to John and Sherrie Downs. He attended elementary school in Chatham, Illinois. After his family moved to Jefferson City, Missouri he graduated from Jefferson City High School in 1991. He was a student at Brigham Young University until he left to serve a two year mission in Argentina for the Church of Jesus Christ of Latter-Day Saints. His love of the Spanish language grew from here. He then returned to college and graduated from Maryville University in St. Louis, Missouri with a degree in Physical Therapy. For 15 years, he was the Director of Rehabilitation Services at Chateau Girardeau and then other assisted living facilities in the area. On March 11, 2006, he was united in marriage to his loving wife, Krystal Kelley. He was devoted to his two daughters, Addison and Emmie, who he adored. He felt the most important job in the world was being a good dad to his girls. He is survived by his wife, Krystal and his daughters; his parents, John and Sherrie Downs; six siblings, Eric (Tracie) Downs, Christian (Julie) Downs, Amy (Alph) Wise, Melissa (Gordon) Shaw, Heather (John) Kampeter and Joshua (Jessica) Downs. He is also survived by his father-in-law, Mark Kelley; mother-in-law, Debra Kelley; brother and sister-in-laws, Laura and Nathan Bell and James and Casey Kelley; as well as 20 nieces and nephews. His wife's grandmother, Norma Kelley held a special place in his heart. Shawn was a man of great faith and had an amazing relationship with the Savior. He was a lifelong member of the Church of Jesus Christ of Latter-Day Saints. He had a wonderful sense of humor and quick wit. Shawn loved all things that involved him in the lives of his two precious daughters. One of his favorite things to do was participate in a good activity that challenged him physically. His Celebration of Life will be 1:00 pm Monday, March 14, 2022 at Ford & Sons Mt. Auburn Chapel in Cape Girardeau with Brother Clifton Gentry officiating. He will be intered at Cape County Memorial Park Cemetery in Cape Girardeau. In lieu of flowers, memorial contributions may be given to Church of Jesus Christ of Latter-Day Saints or American Brain Tumor Association. Ford & Sons Funeral Home is in charge of arrangements. Online condolences may be made at www.fordandsonsfuneralhome.com

The family of Shawn Downs created this Life Tributes page to make it easy to share your memories.

Send flowers to the Downs family.