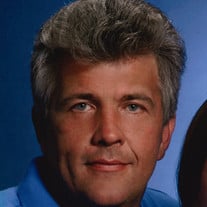 Scott Duane Stearns, 51, of Cape Girardeau passed away on Wednesday, July 21, 2021. Scott was born on October 28, 1969 to Virgil Ray Stearns and Minnie Rose Stearns (Sievers). He spent his childhood playing sports, delivering newspapers, mowing yards--anything he could to help his Mom, who lost her husband shortly after Scott's birth on January 24, 1970. A graduate of Jackson High School class of 1988, Scott gained experience working multiple jobs, always striving to be the best worker and provider he could be for his family. Scott, his sister, Saundra, and her husband Larry, opened the Flower and Garden Shop in March of 1991. Scott met his wife, Kimberly Kay Henderson, at Diebolds Orchard in Benton, MO. Scott and Kim were married on June 8, 1991, with five children across 30 years of marriage. Scott was a leader in Cub Scout Pack 18 for his sons, and watched three of his sons attain the rank of Eagle Scout with Boy Scout Troop 5. He enjoyed his flowers, gardening , and was quick to drop everything if his family or friends needed help. He was a member of Jackson First Baptist his entire life. Together, Scott and Saundra Young ran the Flower and Garden Shop for nearly 30 years, with Scott full-time. Loving survivors include include his wife, Kimberly of Cape, children Tonya, Nathan, Aaron, Nicholas Stearns of Cape. Matthew (Alivia) Stearns, of Jackson, had one grandchild, Alethea Mae Louise Stearns, who will miss her Papa very dearly. Surviving sisters are, Saundra (Larry) Young of Jackson, Debra (Jerry) Seabaugh of Jackson. One brother, Gary Stearns of Cape survives. On his wife's side, he leaves behind two brother in laws Scott (Christy) Henderson of Sikeston, and Mark (Golda) Henderson of Georgia. He had numerous aunts, uncles, nieces, nephews, and cousins who will miss him on both sides of the family. He also had many long time customers and friends he met thru the Flower and Garden Shop and across his life, who will miss him dearly. He was preceded in death by his parents, brother, Terry (Joyce) Stearns, father and mother in law Earl and Janice Henderson. Pallbearers include his four sons along with Shane Richards and Mike Littleton. Visitation will be 4:00 pm to 8:00 pm Monday, July 26 at Ford and Sons Funeral Home in Jackson. Funeral service will be held at 10:30 a.m. Tuesday, July 27 at the funeral home, with Pastor Troy Richards and Rev. Randy Riley officiating. Burial will be at Russell Heights Cemetery in Jackson. Memorial contributions may be given to First Baptist Church of Jackson. Online condolences may be made at fordandsonsfuneralhome.com

The family of Scott Duane Stearns created this Life Tributes page to make it easy to share your memories.

Scott Duane Stearns, 51, of Cape Girardeau passed away on Wednesday,...

Send flowers to the Stearns family.