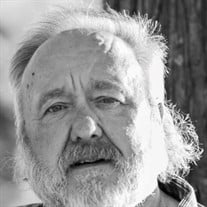 Scott Allen Richards (Big Scott), 64, passed away Saturday, April 9, 2022, doing one of the many things that he loved, walking the hills of Illinois. Scott was born on March 21, 1958 in Moline, Illinois to the late Francis (Dick) and Mary Rumler Richards. He was recruited for a beautiful basketball career in which he spent the first 2 years of his college education playing ball at University of Nevada, Reno. He then finished his basketball career here in Cape Girardeau after receiving a full ride scholarship at Southeast Missouri State University in May 1981. He earned a Business Degree from SEMO and continued his education to become a Licensed Land Surveyor at Southern Illinois where he earned registration and certification to practice surveying in Missouri, Illinois and Arkansas. He began his surveying career as a dear apprentice of Mary’s father, Richard T (Papa) Kogge. On October 16th, 1982, Scott married his sweetheart, Mary Louise (Kogge) Richards in which they have spent the past 39 years building a home together. They stayed busy running a successful business, Richards Land Surveying as well as raising their two daughters and later enjoying their 6 grandchildren, nieces and nephews. Big Scott loved an adventure. He enjoyed the outdoors, spending time with his family by the pool, going to yard sales and spending his weekends in Peckerwood Holler with his treasured wife Mary. He was mostly known as Bebo or Gampa to his beloved grandchildren in which he especially loved going metal detecting with them, taking them to the park and running errands with them. Scott was not a quiet man; he had a wonderful laugh with a booming voice which we will miss dearly. He sure had a knack for finding good deals, and never failed to provide for his loved ones; near and far. Scott is survived by his loving wife, Mary, his children, Kate Reeves (Jared) of Cape Girardeau; Megan Frazier (Mark) of Cape Girardeau and sister, DeAnn Thompson, (Kelly) and family, of Ava Missouri as well as Pauline Richards. He is celebrated through the lives of his grandchildren Josh, Luke and Drew Reeves, as well as Haddie, Millie and Norah Frazier who always kept him running. He was preceded in death by his parents; Francis Junior (Dick)and Mary Mildred (Rumler) Richards; his brother Steven Richards and his father and mother-in-law, Richard T (Papa) and Patricia Ann (Nana) Kogge; all of which had a piece of his heart. A memorial Mass for Scott is scheduled for 11:00 am on Wednesday April 13, 2022, at St. Vincent de Paul Church. It will be immediately followed by a Celebration of Life luncheon in the lower meeting room of the church. Please join us in person or spirit to celebrate this great man. He will be dearly missed.

Scott Allen Richards (Big Scott), 64, passed away Saturday, April 9, 2022, doing one of the many things that he loved, walking the hills of Illinois. Scott was born on March 21, 1958 in Moline, Illinois to the late Francis (Dick) and Mary... View Obituary & Service Information

The family of Scott Allen Richards created this Life Tributes page to make it easy to share your memories.

Send flowers to the Richards family.