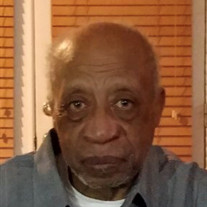 Samuel Sparks, 80, departed this life on Wednesday, January 19, 2022 at Life Care Center of Cape Girardau. He was a loving husband, father, brother, uncle and friend, and will always be remembered fro the love he showed to his family and friends. Samuel was born June 2, 1941 to the union of John Wesley Sr. and Ethel Sparks-Gilbert, in Steele, Missouri. He was educated in the Caruthersville School System. Samuel accepted The Lord Jesus Christ in his life at a young age. He enlisted in the United States Army on March 8, 1967 at the age of 26 and became a E6 Staff-Sergeant. After being released from the United States Army, Samuel relocated to Cape Girardeau, where he married Willie Mae Walker to this union there was a son, Jerome Walker. Samuel was employed by Buckner and Ragsdale until their closing, then moved on to be employed by (Famous-Barr) Macy's until retirement. He later united in marriage to Evelyn Harris on November 12, 1977 until she preceded him in death. Samuel loved to fish, play pool, play the lottery and eat butterscotch candy. He was an amazing family man. He leaves to cherish his son, Jerome Walker of Cape Girardeau; two brothers, Manuel (Sharon) Sparks and Robert (Regina) Sparks both of Kansas City, Missouri; four step-children; host of grandchildren and great-grandchildren; special niece, Jenita Sparks Johnson of Cape Girardeau; special nephew, Fredrick (Torsha) Sparks of Cape Girardeau; and special great-niece, Micah Sparks of Cape Girardeau. He was preceded in death by his father, John W. Sparks Sr.; mother, Ethel Sparks-Gilbert; sister, Johnnie M. Sparks-Breckenridge; brother, John W. Sparks Jr.; grandmother, Doll-Mclillie; and grandfather, King Smith. Visitation will be 10:00 am to 11:00 am on Friday, January 28, 2022 at Ford and Sons Mt. Auburn Chapel in Cape Girardeau. Funeral service will be at 11:00 am Friday, January 28, 2022 at the funeral home with the Rev. Rodrick King Sparks officiating. Burial will be at Missouri State Veteran Cemetery in Bloomfield, Missouri. Online condolences may be made at www.fordandsonsfuneralhome.com. Ford & Sons Funeral Home - Mt. Auburn is in charge of arrangements.

Samuel Sparks, 80, departed this life on Wednesday, January 19, 2022 at Life Care Center of Cape Girardau. He was a loving husband, father, brother, uncle and friend, and will always be remembered fro the love he showed to his family and friends.... View Obituary & Service Information

The family of Samuel Sparks created this Life Tributes page to make it easy to share your memories.

Send flowers to the Sparks family.