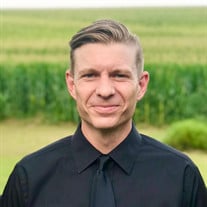 Ryan Allen Hohenadel, age 41, of Cape Girardeau “finished the race” Wednesday, April 28, 2021, after battling a terminal illness. Originally from Perryville, Missouri, Ryan lived with his family in North Carolina, Oregon and Tennessee before returning to Missouri in 2017. Ryan grew up in Perryville, where he discovered his love for running and fitness while running cross country/track for Perryville High School. He later attended Evangel College, where he received an associate’s degree in construction technology. He earned a bachelor’s degree from Missouri State University in construction management. Ryan then began his career in AutoCAD. Ryan’s hobbies included woodworking, leather tooling, book making, beef jerky making, coffee roasting, running, camping, hiking, rock climbing, playing guitar and drums, graphic design/logo design, mentoring, cycling, video making, encouraging others, seeing how different materials burn in a fire, discovering new hot sauces, traveling and building. Ryan began his journey battling cancer in 2019. It is in this space that he and his family moved to Cape Girardeau and also where Ryan expanded his influence to encouraging an online community. Through Instagram @longrunfit, he was able to create a space of hope and healing for people he would never meet, but cared for him deeply. Ryan is survived by his beloved wife, Gloria; his two sons, Jonas (13) and Silas (10); his daughter, Ada Beth (3); his parents, Dr. Ronald and Patricia Hohenadel; and his sisters, Emily (Steven) Richardson and Joanna (Andrew) Rozier. Ryan’s celebration of life will be at 11 a.m. Monday at Mount Auburn Christian Church. In lieu of flowers, please donate to the memorial scholarship fund for the Hohenadel children at gofundme.com/f/memorial-scholarship-for-hohenadel-children/donate. Finally, Gloria and her children wish to say that your prayers and support have meant so much to them. Ford and Sons Funeral Home is in charge of arrangements. Online condolences may be made at fordandsonsfuneralhome.com.

The family of Ryan Hohenadel created this Life Tributes page to make it easy to share your memories.

Send flowers to the Hohenadel family.