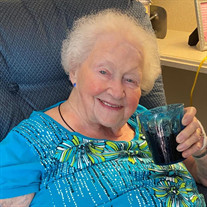 Ruth Joyce Pfister, known to all as Joyce, Joy, Joycee, or Mom, 87, of Cape Girardeau, Missouri died Monday, September 13, 2021 at Chateau Girardeau. She was born October 4, 1933 in Patchogue, New York, to Albert Boggs and Ruth Dorsey Boggs. She and the late Michael E. Pfister were married October 1960 at Plainfield, New Jersey. He preceded her in death. Ray Sager was her companion for 24 years. He preceded her in death. She was an office worker for Mamco Property Management, a teacher aid for several years in the Delran School district and a Girl Scout leader. She volunteered at Deborah Heart and Lung Center in Browns Mills, New Jersey as well as a special committee member for pre-sentencing in the Juvenile court systems. She was a Majorette at Riverside High School Drum and Bugle Corps, and a member of the 69ers club. She was of the Lutheran faith and a beloved mother to all she knew. Survivors include a daughter, Verna (Tom) Nelson of Cape Girardeau; two sons, Drew (Aziza) Calandrella of Laguna Beach, California, and Mark (Bernadette Lombardi) Calandrella of Loyalton, California; a first cousin, Ann Dorsey of Bethesda, Maryland; six grandchildren, Sean (Susie) Calandrella, Brett Calandrella, Jasara Calandrella, Gianni Calandrella, Brieanna Calandrella, Michael Nelson; six great-grandchildren, Siena Calandrella, Lucca Calandrella, Bima Calandrella, Rai Calandrella, Cody Hayes and Izabella Hayes. She was preceded in death by her parents, husband, and companion. The Memorial of Our Mother will be as follows: A Touch of Class, 3001 US-130, Delran, NJ 08075, 856-461-8660 Sunday, October 24, 2021 from 4:30 – 7:30 pm. In lieu of flowers donations may be given to Humane Society of Southeast Missouri, 2536 Boutin Dr, Cape Girardeau, MO 63701; website semopets.org and choose from the drop-down menu to the Donate site Or to the Deborah Heart and Lung Center, 200 Trenton Road, Browns Mills, NJ 08015; website demanddeborah.org and choose from the drop-down menu to the Donate site. Online condolences may be made at www.fordandsonsfuneralhome.com. Ford & Sons Funeral Home - Mt. Auburn is in charge of arrangements.

The family of Mrs. Ruth Joyce Pfister created this Life Tributes page to make it easy to share your memories.

Ruth Joyce Pfister, known to all as Joyce, Joy, Joycee, or Mom,...

Send flowers to the Pfister family.