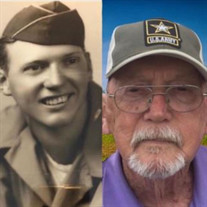 Ross "Hooch" Young, 98, of Cape Girardeau, Missouri passed away Wednesday, September 30, 2020 at the Missouri Veteran's Home. He was born August 4, 1922 in Cape Girardeau, Missouri. He was preceded in death by his parents, Ross and Hildegarde (Cambron) Young; his wife, Dorris Felter; daughter, Jean Young Byrd; sister, Shirley (the late Don) Waggener (the late Carl) Faiks; brother, Russell “Sunny" (the late Pauline) Young. Survivors include two daughters, Susan (Robert) Rosenthal of St Louis; Robyn Young of Cape Girardeau; three grandsons, David (Bärbel) Byrd of West Point, NY, Phillip (Frieja Zamayla) Atteberry of Austin, TX, Dan (Laine) Byrd of Cordova, TN; three great-grandsons, Wren Atteberry, Brayden and Jakob Byrd. He will be missed by sisters and brother-in law, nieces, nephews, cousins, and friends. A special thank you to Ronn Unterreiner for being there for us. Ross was very proud to have served in the U. S. Army. He was a Timberwolf in WWII under the command of “Terrible” Terry Allen, of the 104th Infantry Division, making a victorious drive thru France, Belgium and Holland, piercing the heart of Adolf Hitler’s collapsing Third Reich. Ross earned two Bronze Stars and a Purple Heart. Many a local area man bought his suits over the years from Ross Young & Sons Men’s Clothing on Main St. However, Hooch’s real passion was golf. He was an avid golfer at Cape Girardeau Country Club and Kimbeland. Also, with the help of other civic minded friends, installed the first greens at The Cape JC Golf Course. He had numerous friends from The American Legion, The VFW, Elks Club, Lions Club and Cape Downtown Merchants Association. The latter were very instrumental in the campaign to get the sea wall built in 1956-64. In lieu of flowers please send donations to MO Veterans Home, Veterans Activity Fund, 2400 Veterans Memorial Dr. Cape Girardeau, MO 63701, or to the charity of your choice. There will be no service at this time.

The family of Ross "Hooch" Young created this Life Tributes page to make it easy to share your memories.

Send flowers to the Young family.