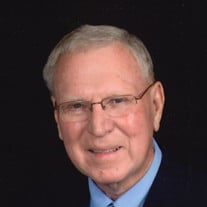 Ronald Dean Ward, 83, of Scott City, Missouri passed away Monday, September 14, 2020, at his home. He was born June 12, 1937, in Cape Girardeau to Ralph and Thelma Sledge Ward. He and Jo Ann Seabaugh were married February 14, 1959, at Sedgewickville Lutheran Church. Their marriage was blessed with three children, Tim, Brad, and Matt. Ron graduated from College High School in Cape Girardeau in 1955, where he played basketball and baseball. He honorably served in the Missouri National Guard for nine years. Ron worked as a salesman in the paint industry for the majority of his career, retiring as a NACE certified engineer with Benjamin Moore Paint Company. Even though work required a lot of travel, Ron rarely missed his sons' sporting events. Ron coached all three of his sons in youth baseball, hitting a lot of ground balls and playing a lot of catch. He was also elected to serve on the Scott City School Board. He was a member of Maple United Methodist Church, where he was active in various roles. Survivors include his wife of 61 years, Jo Ann Ward of Scott City, Missouri; three sons, Tim M. (Kelly) Ward of Crestwood, Kentucky, Brad L. (Marnie) Ward of Jackson, Missouri and Matthew (Melissa) Ward of St. Augustine, Florida; 11 grandchildren; and seven great-grandchildren. He was preceded in death by his parents. A graveside service will be at 11:00 am Friday, September 18, 2020 at Cape County Memorial Park Cemetery in Cape Girardeau with the Rev. Jeff Estes officiating. Memorial contributions may be given to Maple United Methodist Church Building Fund, 2441 Jean Ann Drive, Cape Girardeau, MO, 63701. Online condolences may be made at www.fordandsonsfuneralhome.com. Ford and Sons Funeral Home - Mt. Auburn is in charge of arrangements.

Ronald Dean Ward, 83, of Scott City, Missouri passed away Monday, September 14, 2020, at his home. He was born June 12, 1937, in Cape Girardeau to Ralph and Thelma Sledge Ward. He and Jo Ann Seabaugh were married February 14, 1959, at Sedgewickville... View Obituary & Service Information

The family of Ronald D. Ward created this Life Tributes page to make it easy to share your memories.

Send flowers to the Ward family.