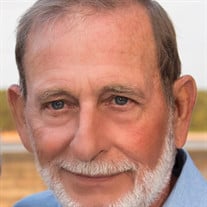 Ronald L. Underwood, 74, passed away peacefully at home on April 27, 2022 following a courageous battle with cancer. He was born September 1, 1947 in Cape Girardeau, Missouri to Albert and Lila Underwood. He and his great love Dana Denny were married February 4, 1995. Ron was a 1965 graduate of Cape Central High School. After the National Guard, Ron began working for his father at Mid-South Steel Products. Once his father retired in 1987, he and his brother Sonny Underwood became co-owners of the company. Ron had a great passion for the outdoors and took joy in his three favorite activities, which were hunting, fishing and golf. He looked forward to going to his beloved ranch and opening it up to anyone that wanted to join him for whatever hunting season it was. In the winter, he and Dana enjoyed traveling down to their home in Florida, where he would often start his day by riding his bike to his favorite fishing spot. Ron also enjoyed joining his golfing buddies for 18 holes whenever the weather permitted and even had a hole-in-one on three separate occasions. He was also known to have played 54 holes in a day more than once. Ron’s friends and family would describe him as a caring and generous man with a heart of gold and a witty sense of humor that made him someone that was always fun to be around. The only thing that Ron loved more than the outdoors was his family. He loved spending time with his wife Dana, daughter Tracy and son-in-law Jason, but being Poppy to his two grandchildren Nicky and Hilary was his greatest joy. He could often be heard proudly bragging about them during casual conversations. Ron’s soft spot for Nicky and Hilary even landed him in Disney World for a family vacation. After the vacation, he proclaimed that it was the one and only time that you would ever find him there, until they begged him to go again three years later…and he did. He is survived by his loving family: his wife Dana, his daughter Tracy (Jason) Jumps; his brother Sonny (Cindy) Underwood; his sister Cathy (Walter) Matthews; grandchildren Nicholas Jumps and Hilary Jumps; many nieces and nephews and countless friends whose lives he touched throughout the years. He was preceded in death by his daughter, Staci Underwood, and his parents Albert and Lila Underwood. Ron left many meaningful and happy memories for those who knew and loved him. His friends and family will continue to honor his legacy by living their lives to their fullest, just as he always did. Visitation will be from 1:00 pm to 3:00 pm Friday, May 6, 2022 at Ford & Sons Mt. Auburn Chapel. A Memorial Service will follow at 3:00. Memorial contributions may be made to Wounded Warriors or St. Jude Children’s Research Hospital.

Ronald L. Underwood, 74, passed away peacefully at home on April 27, 2022 following a courageous battle with cancer. He was born September 1, 1947 in Cape Girardeau, Missouri to Albert and Lila Underwood. He and his great love Dana Denny were... View Obituary & Service Information

The family of Ronald L. Underwood created this Life Tributes page to make it easy to share your memories.

Ronald L. Underwood, 74, passed away peacefully at home on April...

Send flowers to the Underwood family.