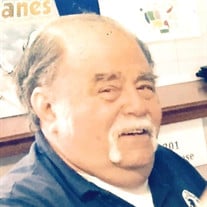 Robert W. Stephens, 78, of Cape Girardeau, passed away Saturday, Sept. 11, 2021 at Saint Francis Medical Center. He was born Dec. 23, 1942 in Paterson, New Jersey to the late William and Agnes Bauer Stephens. Robert and Christine Barry were married March 27, 1965. She preceded him in death Oct. 5, 2006. He proudly served his country in the US Air Force, traveling the world in war and peacetime. He served several tours of duty in Vietnam and was stationed in Europe, Thailand, the Philippines, Korea, Georgia, Utah, Hawaii, New Mexico and too many other places to keep track of. His great love, other than family and his God, was airplanes. If you wouldn't at least pretend to love airplanes as much as he did he really wouldn't have much to say to you. He lived a long life, and saw and did just about everything he could have wanted to. Robert was a member of St. Mary's Cathedral, Knights of Columbus 1111, and Missouri Civil Air Patrol. He is survived by his sons, Rob (Joan) Stephens of Jackson and David (Sherry) Stephens of Cape Girardeau; daughter, Christine (Klaus) Mueller of Cape Girardeau; grandchildren, Katherine (Travis) Roth of Friedheim, Melissa Stephens of Jackson, Sarah (Robert) Hendrix of Cape Girardeau, Joy (Ben) Winter of Kansas City, Miles Mueller of Cape Girardeau, and Rebecca Keene of Cape Girardeau; great-grandchildren, Charlotte, Nathan, and Leah Roth of Friedheim; brother, John Stephens of New Jersey. He was preceded in death by his parents; his wife, Christine, and a brother, Bill Stephens. Visitation will be Wednesday from 9:00 to 10:30 a.m. at Ford and Sons Mt. Auburn Chapel. Funeral Mass will follow at 11:00 a.m. at St. Mary's Cathedral with Rev. Allan Saunders officiating. Burial with full military honors will be at St. Mary Cemetery. Rules to Live and Work By 1. You can only function to the level to which you have been trained. 2. We can only do so much. 2a. I will only do so much. 3. Someone else’s failure to plan is not a reason to panic. 4. There are some things over which we have no control. 5. You have three choices: good, fast, or cheap. Pick one. 6. We have been doing so much with so much for so long, now we are expected to do everything with nothing forever. 7. We will leave at the end of the shift. 8. I will be paid for all hours worked. 9. If you’re not going to like the answer, don’t ask the question. Give ‘em hell, Dad.

The family of Robert W. Stephens created this Life Tributes page to make it easy to share your memories.

Send flowers to the Stephens family.