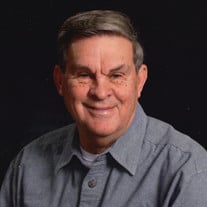 Robert Porter, 83, of Cape Girardeau, Missouri died Wednesday, January 12, 2022 at Missouri Veteran's Home in Cape Girardeau, Missouri. He was born December 15, 1938 in Murphysboro, Illinois to George and Sharlotte Davis Porter. He and Helen Marie Christensen were married June 2, 1962 in Murphysboro, Illinois. He served in the United States Army. Robert Started at Picker X-Ray and Medical in January 1965. He retired from Phillips Medical Systems in 2005. He was a member of American Legion, NRA, Rocky Mountain Elk Foundation, Ducks Unlimited, Delta Waterfowler and the Wild Turkey Federation. He was a long term board member of East Cape Chamber of Commerce. Robert was a former member of McClure-East Cape Water Board. Survivors include his wife, Helen Marie Christensen Porter; two sons, Kenneth Porter of McClure, IL and Robert L. (Tammy) Porter of Palm Desert, CA; Brother, John (Lynn) Porter of Murphysboro, IL; four grandchildren, Chris Porter of Nashville, TN, Baili Porter of Birmingham, AL, Austin Porter and Brittany Porter both of McClure, IL; two step-grandchildren, Sydney Forgatch of St. Louis, MO and Sean Forgatch of Austin, TX. He was preceded in death by his parents and three sisters. Visitation will be from 10:00 am to 12:00 am on Tuesday, January 18, 2022 at Ford & Sons Mt. Auburn Chapel in Cape Girardeau. Funeral Service will follow at the funeral home at noon with the Rev. Randy Morgan officiating. Burial will be at Lindsey Cemetery in McClure, IL. Memorial contributions may be given to Parkinson's Foundation. Online condolences may be made at www.fordandsonsfuneralhome.com. Ford & Sons Funeral Home - Mt. Auburn is in charge of arrangements.

The family of Robert Porter created this Life Tributes page to make it easy to share your memories.