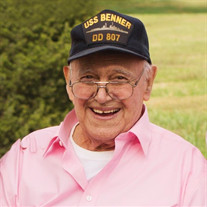 Robert D. “Bob” Nix, 83, of Jackson, passed away Tuesday, February 9, 2021 at Southeast Hospital. He was born August 1, 1937 in Delta, Missouri to Walter and Opal Gibbons Nix. Bob proudly served his country in the U.S. Navy from 1955 until 1959 and was stationed on the U.S.S. Benner. After his service he married Margaret Long on March 11, 1960 in Advance, Missouri. Throughout his working years Bob worked for Cape Ready Mix, Drury and Georgia Pacific. He also served his community as part of the Cape Girardeau Police Department Auxiliary in the 1960’s. He was a member of Emerald Street Church of God. Bob cherished his family and will be deeply missed by all who knew him. Loving survivors include his wife of 60 years, Margaret Nix of Jackson; children, Robin (Robert) Wilson of Jackson, Robert D. (Sarah) Nix, Jr. of Ratliff City, Oklahoma and John (Angie) Nix of Oak Ridge; brother, Jerry Nix of Sedgewickville; sister, Sue Owens of Scott City; 11 grandchildren, 17 great-grandchildren, many nieces, nephews, great nieces and nephews. He was preceded in death by his parents; sister, Patricia Brady; sister-in-law, Jane Nix; brother-in-law’s, Ronnie Owens and Don Brady. Visitation will be Friday, February 12, 2021 from 12:00 to 1:00 p.m. at Ford and Sons Mt. Auburn Chapel. Funeral service will follow at 1:00 with Brother Jeff Lohrstorfer officiating. Burial will follow at Russell Heights Cemetery in Jackson. Memorial donations may be given to Emerald Street Church of God, 500 Emerald St., Cape Girardeau, Missouri 63701.

The family of Robert D. "Bob" Nix created this Life Tributes page to make it easy to share your memories.

Send flowers to the Nix family.