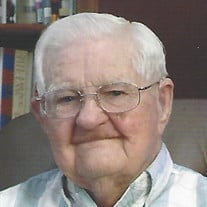 Robert "Bob" Martin, 95, of Cape Girardeau, Missouri passed from his earthly body into eternity and God's glorious presence on Monday, September 14, 2020 at the Missouri Veteran's Home. He was born February 5, 1925 in Atlanta, Georgia to George F. Martin and Ola M. Pate Martin. He and Torres Yvonne Halterman were married August 26, 1951 at First Presbyterian Church in Anna, Illinois. She preceded him in death on July 3, 2000. Bob joined the military at age 17. He served his country for 12 1/2 years serving in both World War II and the Korean Conflict. He served in three branches of the armed forces, the Navy from 1942-1946, the Air Force from 1946-1949 and the Army from 1949-1955. During World War II , Bob, his three brothers and his father were all serving at the same time. Patriotism ran deep in Bob's family. Throughout his adult life, Bob cooked and baked for a living. He was a cook for the Anna State Hospital in Anna, Illinois for 13 years and the Western State Hospital in Staunton, Virginia for four years. He served as a baker for the Bunny Bread Bakery in Cape Girardeau for 12 years retiring from there. Bob found great joy and reward as a volunteer at Saint Francis Medical Center where he logged thousands of hours and wore out dozens of pairs of shoes over the course of many years. In 2009, Bob was awarded the Vernice V. Baumstark Award. That award is presented to the person who best represents the Saint Francis Auxiliary's dedication, loyalty and service to the Medical Center. This was one of his proudest recognitions. He loved his time as a volunteer and considered himself to be a proud member of the Saint Francis Medical Center family. Out of the many things for which he could be remembered, his family feels that Bob would most like to be remembered as a good, caring and generous man who loved people and loved to help and make a difference where he could. He was young at heart, had a kind soul and a warm smile for all. Survivors include one son, Chuck (Jean) Martin of Cape Girardeau; two grandsons, Christopher M. Martin and Benjamin A. Martin of Cape Girardeau; and a loving niece, Cheryl Martin and her family of Stuart's Draft, Virginia. He was preceded in death by his parents, wife and brothers, Frank, Ted and Paul Martin. Friends may call from 10:30 am to 12:30 pm on Friday, September 18, 2020 at Ford and Sons Mt. Auburn Chapel in Cape Girardeau. Funeral service will be at 12:30 pm Friday, September 18, 2020 at Ford and Sons Mt. Auburn Chapel in Cape Girardeau with the Rev. Ed Rothenberger officiating. Burial will be at Anna City Cemetery. There will be graveside military rites. Memorial contributions may be given to the Humane Society of Southeast Missouri, 2536 Boutin Dr., Cape Girardeau, MO, 63701. Bob was a pet lover and a pet owner. He would be pleased to have funds donated to help the Humane Society during their current capital campaign to build a new, modern facility.

Robert "Bob" Martin, 95, of Cape Girardeau, Missouri passed from his earthly body into eternity and God's glorious presence on Monday, September 14, 2020 at the Missouri Veteran's Home. He was born February 5, 1925 in Atlanta, Georgia to George... View Obituary & Service Information

The family of Robert "Bob" Martin created this Life Tributes page to make it easy to share your memories.

Send flowers to the Martin family.