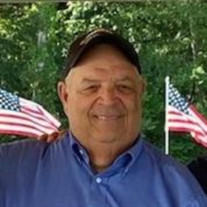 Robert Murry Cranmer, 72, of Jackson, Missouri died Monday, November 30, 2020 at Southeast Hospital. He was born November 27, 1948 in St. Louis, Missouri to Eugene George and Norma Edith Woodworth Cranmer. He and Gail Foster were married March 30, 1972 at Faith Methodist Church in House Springs, Missouri He was a graduate of Lafeyette High School in St. Louis. He received his BS in Mechanical Engineering from University of MO-Rolla. He started his scouting career while in college as a scout master in Rolla for LDS Church. He became the Scout Master of Troop 311, where he served as Scout Master for 27 years and had 64 eagle scouts during that time. He was the plant safety manager for Proctor and Gamble in Cape Girardeau for 27 years. From 1997-2001 he co-owned Dalton's Florist with his wife Gail. He also worked as a safety consultant for Air Liquide teaching OSHA classes in Kansas, California, Texas, Louisiana and Tennessee. He was also a safety consultnat for Jer-Dan in Cape Girardeau. He was a Captain in the United States Army. He volunteered in Perryville at the Veterans Wall. He was a member of New McKendree United Methodist Church in Jackson. Survivors include his wife, Gail Cranmer of Jackson; son, Reid (Melanie) Cranmer of St. Louis, Missouri; daughter, Stacey (Matt) Buenemann of Lexington, Kentucky; three brothers, Lester (Jan) Cranmer of House Springs, Missouri, Raymond (Donna) Cranmer of Glen Carbon, Illinois and Joe (Marque) Cranmer of Oklahoma City, Oklahoma; sister, Debbie (Steve) Watson of Villa Ridge, Missouri; and three grandchildren, Hayli Cranmer, Isla Cranmer and Alison Buenemann. He was preceded in death by his parents. Visitation will be 3:00 pm to 7:00 pm Friday, December 4, 2020 at Ford and Sons Funeral Home in Jackson. Private funeral service will be Saturday, December 5, 2020 at the funeral home in Jackson with the Rev. Bryan Wendling officiating. Burial will be at Russell Heights in Jackson. Memorial contributions may be given to Missouri's National Veterans Memorial, 1172 Veterans Memorial Pkwy, Perryville, MO 63775. Online condolences may be made at www.fordandsonsfuneralhome.com. Ford and Sons Funeral Home - Jackson is in charge of arrangements.

The family of Robert Murry Cranmer created this Life Tributes page to make it easy to share your memories.

Send flowers to the Cranmer family.