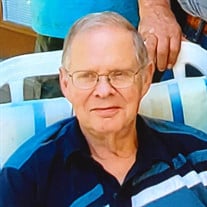 Richard Nenninger died December 23, 2020 at Southeast Missouri Hospital from aggressive cancer. Richard was born in Cape Girardeau December 26, 1947, the fifth child of the late Charles and Bernadine Nenninger. Four siblings have preceded him in death. Richard was a member of St. Vincent De Paul Parish. He attended St. Mary’s grade school, Notre Dame High School and graduated from SEMO University in 1971 with a BS in education, major in speech, minor in art. He belonged to the Black Mask Society (theatre). He liked constructing scene sets for line productions. He along with his brother, Chuck Nenninger constructed scenes that were easy to move for the plays at Notre Dame High School. He is still remembered by the School Sisters of Notre Dame teachers who appreciated his time and talent. Richard taught art in the Delta public school. Children’s art he found fascinating. Richard worked for Stev Mark mainly framing pictures. His work was precise and beautifully done. Richard retired from P&G at age 62. In these last 10 years his dedication to works of art kept his interests. His art is displayed in the yard at Nenninger Lane. Richard seldom created anything small. After retiring from P&G, he worked for Schnucks. He loved his co-workers, managers, and the people he served. The last two and a half years a beloved friend into his life, Margaret Wells. He said to her “I never thought I could love at age 69”. They mutually enriched each other’s lives. Richard practiced Transcendental meditation most of his life. He was introduced to centering prayer through Rev. Rick Jones at St. Vincent De Paul Parish. His friend Margaret introduced him to Legong, an internal meditation movement. Richard was a supporter of the River Campus. He especially enjoyed the steel drums. Richard enjoyed the plays. He liked to critique how the sets were constructed. He enjoyed the downtown house concerts. He loved classical, jazz music and soulful singers. He was an avid reader. Richard was a thinker, inclusive of people and a kind man. He could talk on almost any subject: farming, cows, music, art, gardening, history. Richard loved to cook for himself and others. His cooking was beyond the ordinary. A mass in Richard’s memory will be held January 13, 2021 at 5:15 p.m. at St. Vincent’s in Cape Girardeau. He is survived by his sister, Richarda Nenninger SSND of St. Louis; brother, Chris of Marble Hill and Chuck (Debbie) of Cape Girardeau; sister-in-law, Jean Nenninger of Glenn Carbon, Illinois; beloved friend, Margaret Wells of Cape Girardeau; many cousins and friends. He was preceded in death by his parents, Charles and Bernadine Nenninger; brothers, Jim and Bob; sisters, Charlotte and Catherine; nephew, Chip Nenninger. The family requests that memorials be made to Clinical Research Unit of St. Louis Children’s Hospital: Attention, Dr. Neil White, 660 S. Euclid Ave, Box 8116, St. Louis, MO 63110.

The family of Richard Nenninger created this Life Tributes page to make it easy to share your memories.

Send flowers to the Nenninger family.