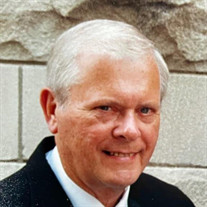 Richard Martin Hagedorn, age 86, of Cape Girardeau passed away peacefully with his family by his side on October 7, 2021 at Southeast Missouri Hospital. He was born September 12, 1935 in St. Louis to the late Elmer and Teresa Martin Hagedorn. Richard graduated from St. Mary’s High School in 1953. He then attended Southeast Missouri State before honorably serving as a medic in the U.S. Naval Reserve. Richard and Doris Cauble were united in marriage October 27,1956 at St. Mary’s Cathedral. He began his career as a meat cutter at Child’s Foodliner, followed by a sales career for Mayrose Meat Packing. He then joined the family business, working alongside his wife and sons as the owner and operator of Cauble and Field Wholesale Grocery and Produce until his retirement. Richard was a faithful and dedicated member of St. Vincent De Paul Catholic Church. He was a role model for all as a devoted husband, father, grandfather, and great-grandfather who loved spending time with his family. He loved traveling with his family, and especially enjoyed boating with them on Kentucky Lake. He had a life-long passion for woodworking, good music and dancing with Doris. His favorite pastime was cheering on his sons and grandchildren from the stands at their numerous activities. He took tremendous pride in their accomplishments. Richard is survived by his loving wife, Doris, of 65 years, and sons Rick (Kim) Hagedorn of Cape Girardeau and Ryan (Amy) Hagedorn of Lake St. Louis, his grandchildren Mark (Rachel) Hagedorn, Megan (Chuck) Fisher, Blake (Sydney) Hagedorn and Lauren, Jacob, and Luke Hagedorn, as well as his great grandchildren Landon and Addison Fisher and Isla Hagedorn. Other survivors are sisters Carol O’Hayon and Diane (Steve) Johnston and a brother, David Hagedorn. His legacy will live in the hearts and minds of those that loved him. He was preceded in death by his parents and brother, Robert Hagedorn. Visitation will be held Monday, October 25, 2021 from 11:00 a.m. to 1:00 p.m. at St. Vincent De Paul Church. The Funeral Mass will begin at 1:00 p.m. with Father Rick Jones officiating. Burial will follow at the Cape County Memorial Park Cemetery. Ford and Sons Funeral Home is in charge of arrangements. Memorial Contributions may be given to Notre Dame Regional High School, St. Vincent De Paul Church, or Southeast Cancer Center.

Richard Martin Hagedorn, age 86, of Cape Girardeau passed away peacefully with his family by his side on October 7, 2021 at Southeast Missouri Hospital. He was born September 12, 1935 in St. Louis to the late Elmer and Teresa Martin Hagedorn.... View Obituary & Service Information

The family of Richard Martin Hagedorn created this Life Tributes page to make it easy to share your memories.

Send flowers to the Hagedorn family.