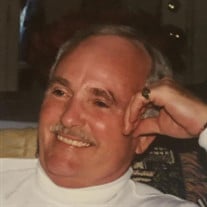 Richard Bodman (Dick) Giles, 82, of Sunset Hills, MO, passed away Friday, July 23, 2021 at his home. He was born January 15, 1939 in Benton, IL, to the late Richard H. and Margaret (Bain) Giles. Dick grew up in Cape Girardeau, MO, and graduated from College High School, where he enjoyed playing on the school basketball team. He then went on to attend Southeast Missouri State University (SEMO), where he worked his way through college playing violin in the college orchestra and selling clothing at Buckner-Ragsdale. During his early college years he was a member of the Benton Society. He was a charter member of the Sigma Chi Fraternity on SEMO’s campus, the result of the Benton Society‘s petition and ongoing efforts to become a new chapter. That new Sigma Chi chapter was officially inducted on April 10th, 1960 as the Epsilon Phi chapter of Sigma Chi and is still thriving to this day. Dick also had the unique honor to initiate of his son into the Epsilon Phi chapter on January 24th, 1987. He stayed active with Sigma Chi as both President of SEMO’s alumni association and as a member of the alumni committee for many years to follow. He was instrumental in the planning of Epsilon Phi’s 50th Anniversary Celebration in 2010. Dick graduated in May of 1961 with a degree in Speech Therapy. Dick married Gail Ann Anderson on August 12, 1961 and the two of them moved to St. Louis later that month. Both were employed by the Lindbergh School District. In 1966 they moved to Sikeston, where Dick started a job as a speech therapist with Sikeston Public Schools. After completing his Masters in Education, he was named Principal at Lee Hunter Elementary School. While living in Sikeston, he was an active Rotarian and was a key leader in Sikeston’s Rotary foreign exchange program. As a member of the First United Methodist Church he enjoyed being a Sunday school teacher. He also took time to sing in a barbershop quartet and play church league softball with friends. In May of 1991 Dick and Gail moved to Cape Girardeau where he had accepted a job as Principal of Clippard Elementary School. They joined Centenary United Methodist Church where he again taught Sunday school and sang with the University Choir, where he had the honor and privilege to perform at Carnegie Hall in New York City. Dick retired in 1996 and bought a parcel of land that they enjoyed visiting on the weekends to fish, take walks, barbeque, and spend time with their children and grandchildren. In October of 2019 they moved to St. Louis to be closer to their children. Dick was preceded in death by his cherished wife, Gail, his parents, his sister Virginia (James) Lakemeyer, and his grandson Luke Masters. His loving survivors include his brothers Thomas (Mary) and David (Joetta) of Cape Girardeau, many nieces and nephews, his daughter Cynthia (T.J.) and son Christopher (Michelle) both of St. Louis, and four grandchildren: Andrew Heinlein, Claire Heinlein, Grant Giles, and Hope Giles. He lived his life as a gentle man, always quick to smile and laugh or lend a hand, and was a fierce protector of children - especially his students that faced difficult challenges in their lives. A Celebration of Life for both Dick and Gail will be held in September. Entombment will be private. Memorial contributions may be given to the Alzheimers Association.

The family of Richard Bodman "Dick" Giles created this Life Tributes page to make it easy to share your memories.

Send flowers to the Giles family.