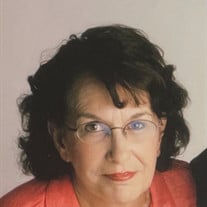 Rhoda Joy Reeves, 85, of Cape Girardeau, Missouri died Wednesday, July 7, 2021 at Southeast Hospital. She was born February 1, 1936 in Poplarville, Mississippi to Rhodin and Jonnie Sutherland Hord. She and Henry Glenn Reeves were married May 11, 1963 at Opelousas, Louisiana. He preceded her in death on November 6, 2019. She attended high school in Japan during Occupation of Japan. She received her undergraduate and masters degree from University of Southern Mississippi in Hattiesburg. She was a speech pathologist at Parkview State School and was founder of Horizon Screen Printing in Cape Girardeau. She was a member of Red Hat Society, garden club and a Girl Scout leader. She was also an active member of NFIB, where she was invited to George W. Bush's first State of the Union address in 2002. She attended LaCroix United Methodist Church. Survivors include three sons, Kevin (Molly) Reeves of Olmsted Falls, Ohio, Dean (Kerry) Reeves of Cape Girardeau and Dru (Tara) Reeves of Jackson, Missouri; one daughter, Sara (Ron) MacCubbin of Cape Girardeau; one brother, Larry (Rita Kay) Hord of Houston, Texas; 11 grandchildren, Conrad, Hayley, Meaghin, Brooke (Ryan), Makenzie (Isaac), Carter, Cooper, Branton (Hannah), Brennan, Clayton, Cameron; and four great-grandchildren, Hattie, Braylin, Jed, Asher. She was preceded in death by her parents and husband. Visitation will be 4:00 pm to 7:00 pm on Monday, July 12, 2021 at Ford and Sons Mt. Auburn Chapel in Cape Girardeau. There will be no service. Memorial contributions may be given to Humane Society of Southeast Missouri (Capital Campaign), 2536 Boutin Dr., Cape Girardeau, MO 63701 . Online condolences may be made at www.fordandsonsfuneralhome.com. Ford and Sons Funeral Home - Mt. Auburn is in charge of arrangements.

The family of Rhoda Reeves created this Life Tributes page to make it easy to share your memories.

Send flowers to the Reeves family.