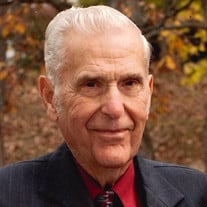 Raymond E. Davidson, 90, of Cape Girardeau, went to his heavenly home on January 7, 2021 from his home on the farm where he was born and raised with his loving family. Raymond was born on September 17, 1930 to William Calvin Davidson and Edna Maevers Davidson at Egypt Mills, Missouri. He was baptized on October 12, 1930 at Trinity Lutheran Church Egypt Mills and was also confirmed there. He was a 1948 graduate from Campus High School and, met his bride, Wanda R. Kain and they were married at Egypt Mills on December 7, 1951 when Raymond was on furlough from the U.S. Marine Corps. He was drafted into the Marine Corps and served from 1951-1953. He was in active-duty combat in the Korean War. When he arrived back state side he served as a shooting instructor at the military training base. Raymond was a truck driver for various local trucking companies and was a member of the Teamsters. He raised cattle on the family farm as another way of providing for his family. He also enjoyed raising his cattle. He would like to come in from a hard day and sit on the front porch and enjoy a cold beer and time with his wife Wanda overlooking the view of the farm. Raymond was a lifetime member of the Lutheran Church and a member of the VFW. He was a very kind and caring man. A very loving husband, father, grandfather, and great grandfather. Raymond will be so very missed by his family and friends. Survivors include his children, Randy Davidson (Iris Dardoni) and Kay Davidson-Landewee (John); grandchild, Heather Thorne; great grandchildren, Skyler Davidson, Tye Thorne and Tayton Thorne; sister, Cecil Beal and two nephews. He was preceded in death by his wife, Wanda Davidson; son, Jeffrey Ray Davidson; parents, William Calvin Davidson, and Edna Maevers Davidson; brother, Earl C. Davidson. A special thank you to the most loving and caring ladies that we were so blessed to have been brought into our lives. Thank you to Southeast Hospice staff for their kindness and caring support. Thank you to the Trinity Lutheran Church family for their loving support and prayers. Funeral service will be Tuesday, January 12, 2021 at 11:00 a.m. at Trinity Lutheran Church with Rev. Douglas C. Breite officiating. Visitation will be one hour prior to the funeral. Burial with full military honors will follow at Cape County Memorial Park Cemetery. In lieu of flowers donations may be given to the Leukemia and Lymphoma Society or Trinity Lutheran Church, Cape Girardeau.

Raymond E. Davidson, 90, of Cape Girardeau, went to his heavenly home on January 7, 2021 from his home on the farm where he was born and raised with his loving family. Raymond was born on September 17, 1930 to William Calvin Davidson and Edna... View Obituary & Service Information

The family of Raymond E. Davidson created this Life Tributes page to make it easy to share your memories.

Raymond E. Davidson, 90, of Cape Girardeau, went to his heavenly...

Send flowers to the Davidson family.