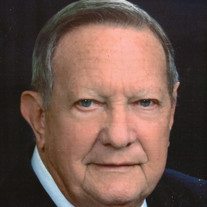 Raymond George Buhs, 94, of Cape Girardeau, Missouri died Friday, September 4, 2020 at St. Francis Medical Center. He was born August 25, 1926 to George and Mary Wiedefield Buhs. Ray was a loving and devoted husband for nearly 74 years to Evelyn Henderson. Together, they build a beautiful, loving family that they proudly watched grow for more than seven decades. Ray was a hard-working man who was devoted to his family, country and his community. Ray served his country as a member of the United States Navy in the South Pacific during World War II and in Korea during the Korean War. He didn't often talk about his military service, but he proudly wore his USS Gage hat. When Ray returned home, he began to build a reputation as a businessman and community leader. Ray went about serving his community in quiet ways. In 2018, he won the Spirit of America Award given by the Southeast Missourian. The many committees and boards he served on throughout his nine decades surprised even his family. He simply showed up for his community and never expected recognition. Ray was also an active member of St. Mary's Catholic Church and served on many boards and committees there, as well. He was active in The Chateau Girardeau Community, where he was on the board of directors for 12 years and loved participating in the social hours he helped to create. He will be deeply missed by his wife, Evelyn and his daughters, LaDeva A. (David) Enderle of Cape Girardeau and Mary Lou (Bill) Grayson of Fort Lauderdale, Florida. He was so proud of his girls, their husbands and their families. His four grandchildren were blessed to have him as a part of their lives: Ray Enderle of Cape Girardeau; Jay Grayson of Fort Lauderdale, Florida; Melanie (Nick) Loeffler of Wake Forest, North Carolina; and Melissa (Neal) Essner of Dubuque, Iowa. Ray enjoyed every moment he had with his seven great-grandchildren, Collin and Maria Enderle, Grayson and Sloane Loeffler, and Dylan, Spencer and Tyler Essner. He was preceded in death by his parents, an infant son, Raymond George Jr., and a brother, Elmer Buhs. Services will be postponed until they can be conducted safely. In lieu of flowers, donations can be directed to Victory Living Programs (an organization that assists individuals with developmental disabilities to live independent lives), 1001 W. Cypress Creek Road, Suite 400, Fort Lauderdale, Florida 33309 or St. Mary's Catholic Church, 615 Williams Street, Cape Girardeau, MO 63703. Ray's family thanks you for your thoughts and prayers as they come to terms with his loss. Ford and Sons Funeral Home - Mt. Auburn is in charge of arrangements.

The family of Raymond G. Buhs created this Life Tributes page to make it easy to share your memories.

Send flowers to the Buhs family.