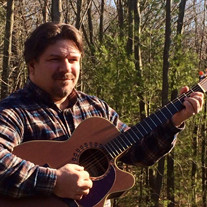 Randy Joe Green, 54, of Cape Girardeau, Missouri died Saturday, December 25, 2021 at Southeast Hospital. He was born September 24, 1967 in Cape Girardeau to Norvel J. Green and Mary Daniels. Randy graduated from Cape Central High School in 1986, where he made a million friends. Randy worked on the river for years and as a recording studio engineer and producer. His life's passion was music. He was a great guitar player, songwriter and studio engineer. He spent years at Riverside Recording, and in his home studio helping hundreds of bands and songwriters record their music, and teaching them how to make professional level records. His guitar playing and encouragement inspired many friends to pick up instruments themselves and build careers and explore their own musical paths. Survivors include two daughters, Lindsey (Jimmy) Reed of Cape Girardeau and Lorey Pender both of Cape Girardeau; mother, Mary Daniels of Cape Girardeau; a brother, Steve Green of Cape Girardeau; four sisters, Angela (Daniel) Armstrong of New Orleans, Louisiana, Rachel (Michael) Aufdenburg of Jackson, Missouri, Crystal Vogel of Saint Louis, Missouri and Vaniasn Green of Cape Girardeau; and six grandchildren, Jeremy, Katelyn, Kenzie, Adalynn, Alexus, Jaxon. He was preceded in death by his father, Norvel J. Green; paternal grandparents, Marie and Norvel Green; maternal grandparents, Mabel and Clifford Daniels; and long time friend, Cynthia K. Pender. Visitation will be 12:00 pm to 1:00 pm on Friday, December 31, 2021 at Ford and Sons Sprigg St. Chapel in Cape Girardeau. Memorial service will follow at 1:00 pm Friday at the funeral home with the Rev. Donny Ford officiating. Memorial contributions may be given to Ford and Sons Funeral Home to assist with funeral expenses. In the days since Randy's passing all of the comments have been the same, "such a nice guy", "always so positive", "he never had a bad thing to say about anyone". That was Randy, always with a smile, a laugh, and always in a good mood it seemed. No matter what, Randy always looked on the bright side of everything. But most of all Randy was a good man. A sweet loving son, a protective and thoughtful brother, a loving and forgiving husband/boyfriend. A doting, loving, supportive and committed father, he loved his daughters with all he had. Randy was a great friend, co-worker, band mate and family member. He was a blessing to all who knew him, and a big loss to us all. If you hadn't seen Randy in a while, or didnt get the chance to say goodbye, don't worry, he loved enough for both of you. He really did. It's hard to define someone in a single paragraph. But in a quote, maybe Randy's final words to his sister were "I love you...it's gonna be alright:. That was Randy, even in those final moments his concern was that everyone else was ok. Goodbye old friend and Godspeed. Online condolences may be made at www.fordandsonsfuneralhome.com. Ford and Sons Funeral Home - Mt. Auburn is in charge of arrangements.

The family of Randy Joe Green created this Life Tributes page to make it easy to share your memories.

Send flowers to the Green family.