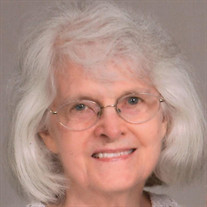 She was born November 3, 1934 in Garden City, Kansas to Leslie Harold and Helen Halleck Tubbs Pennington. During the Western Kansas dust bowl days her family moved to the Labette County, Kansas area where other relatives were living. Rachael graduated from Labette County High School in the class of 1952 and later that same year she and John Edward Young were married August 31, 1952 in Altamont, Kansas. After her marriage she attended Ottawa University in Kansas and Kent State University in Ohio, studying vocal music. Rachael moved to Cape Girardeau with her family in 1968 when John joined the faculty of Southeast Missouri State University. She was active as a volunteer in the community which included a local group to assist families of those with Down's Syndrome and the Head Start program when it began here in the 1970s. She was a member of First Baptist Church of Cape Girardeau where for many years she served as a children’s Sunday School teacher, was part of the Sanctuary Choir, women’s trio, and a soloist. She was also active in the Missouri Baptists Women's Choir. When she sang, it was clear in her countenance that she was worshipping the Lord from her heart. More than her volunteer and church activities, Rachael found her greatest joy and purpose in being a wife and mother, considering this a very high calling. Of high importance was sharing from her faith in Christ and cultivating a love of God’s Word in her family. She passed on her love of music to her children, using her pocket money for piano lessons for six of them. The love of music has passed down through the generations with children and grandchildren continuing to study and perform in music, many making it their career and to this day music fills the room when the family gathers at holiday time. Those who know her best describe her as a kind, gentle, and gracious friend. Survivors include her husband John E. Young of Cape Girardeau; three sons, Lawrence "Larry" (Deborah) Young of Cape Girardeau, Eric (Nanci) Young of Pocahontas, Arkansas and Bryan (Amy) Young of Jackson, Missouri; four daughters, Melinda (Michael) Mullins of Waterloo, Illinois, Kirsten (Christopher) Rasche of Rogers, Arkansas, Sarah Young of Cape Girardeau and Lucinda "Cindy" Young of Cape Girardeau; son-in-law, Carl "David" Atkins of Cape Girardeau; brother, William Pennington of Sacramento, California; sister, Margaret (John) Cosby of Mesa, Arizona; 18 grandchildren, Crystal Monahan (Mark Hudoba), Carly (Lee) Winters, Jessica Atkins, Lauren (Joseph) Thomas, Andrew (Kristie) Young, Jonathan (Natalie) Young, Erin (Cody) Ivy, Mary Kathryn "Katie" Young, Jason Young, Elise Mullins, Sean Mullins, Lindsay (Ryan) Reams, Veronica Young, Kendall Young, Michael (Lisa) Rasche, Allison (Scott) Brenner, Caitlin (Tyler) Rodgers, and Stephen Rasche; 16 great-grandchildren; and 6 great-great-grandchildren. She was preceded in death by her parents; daughter, Rebecca Atkins; brother, Eugene Pennington; and sister, Eleanor Potter. Friends may call 11:30 am to 1:00 pm on Tuesday, October 26, 2021 at Ford & Sons Mt. Auburn Chapel in Cape Girardeau. Funeral Service will be at 1:00 pm Tuesday, October 26, 2021 at Ford & Sons Mt. Auburn Chapel in Cape Girardeau with the Rev. Mike Shupert officiating. Burial will be at Fairmount Cemetery in Cape Girardeau. Memorial contributions may be given to First Baptist Church or Multiple Myeloma Foundation. Online condolences may be made at www.fordandsonsfuneralhome.com.

She was born November 3, 1934 in Garden City, Kansas to Leslie Harold and Helen Halleck Tubbs Pennington. During the Western Kansas dust bowl days her family moved to the Labette County, Kansas area where other relatives were living. Rachael... View Obituary & Service Information

The family of Rachael H. Young created this Life Tributes page to make it easy to share your memories.

Send flowers to the Young family.