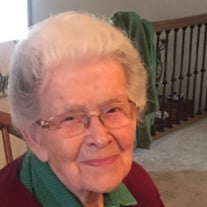 Peggy Joyce Raddle, 91-year-old resident of Cape Girardeau, Missouri departed this life October1, 2020 at Southeast Hospital in Cape Girardeau. She was born June 2, 1929 in Doniphan, Missouri to the late Claude Lee and Maude Lee (Rideout) Ponder. Peggy was the ultimate homemaker. Her home was always warm and welcoming for anyone who dropped by, and usually something delicious was cooking on the stove or baking in the oven. Peggy was a talented seamstress making clothes and decorating her home and cabin. With their deep roots in the Doniphan area, Vince, Peggy and their children made a home away from home spending time at their cabin on Current River. She was also known for her green thumb. She and Vince could make most anything flourish, from their garden to pecan trees to the roses they planted and would experiment on by growing hybrids. She was a kind, gentle person. All who met and knew Peggy felt her warm, loving personality. Whenever she talked with you, she always made a person feel important and gave her undivided attention. Peggy was very active and involved in her church, First Pentecostal Church in Cape Girardeau. With her faithfulness to her church and calm, loving personality, she was a perfect choice to serve in many ways including teaching Sunday School classes. After high school and before marrying Vince, Peggy had also taught school at Pig Ankle, a one-room school at Naylor, Missouri. On April 22, 1950, Peggy married Vincent Herbert Raddle who survives. they celebrated 70 years of marriage. She was his "Momma Bear," and he was her "Poppa Bear." Surviving are her two children, Dennis Raddle (fiance, Deborah Osterhold Jung and son, Adam Jung of Cape Girardeau) and Sandra Carnahan (her special friend and partner, Jim Morrison), of Poplar Bluff, Missouri; her grandchildren, Bryan Carnahan, Lauren (Cameron) Duvall, Tara (Dandy) Coker, and Amy Raddle and fiance, Awsten Powell; and two great-granddaughters, Audrey and Harper Duvall. Also surviving are her two sisters, Martha Adams of Doniphan, Missouri and Sarah Condray of St. Louis, Missouri. Mrs. Raddle was preceded in death by her two brothers, Claude (Duke) Ponder and Chester (Bud) Ponder. Due to Covid-19 a private family service will be held. Burial will be at Amity Cemetery in Doniphan, Missouri with the Rev. Darrell Faire officiating. In lieu of flowers, the family requests memorial contributions to the Alzheimers Association. Online condolences may be made at fordandsonsfuneralhome.com. Ford and Sons Funeral Home in Cape Girardeau is in charge on arrangements.

The family of Peggy Raddle created this Life Tributes page to make it easy to share your memories.

Send flowers to the Raddle family.