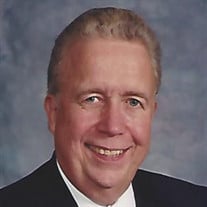 Paul Joseph Lloyd, 79, of Cape Girardeau passed away on September 18, 2020 at St. Francis Medical Center. Paul was born on May 15, 1941 in Denver, Colorado to John Arthur Lloyd and Lorretta Hensgen Lloyd. Paul and Karen Pickens Lloyd were married in Cape Girardeau on his birthday in 1975. Paul is a 1978 graduate of Saint Louis University with a Ph.D. in psychology. He was a professor of psychology at Southeast Missouri State University for forty years. He received the PRIDE award in 2010 for teaching and Service to the University. He also was a former president of the American Psychological Association (APA) and served six years on the APA council of Representatives and APA Fellows Committee. He was also a member of Rotary for over 30 years, a board member for Cultural Exchange Network (CENET), and Habitat for Humanity. Paul loved his Airstream and after retirement he and his wife spent many years traveling to Florida in the winter months and returning home from Paradise Park where they could enjoy living in their trailer and meeting many friends from Canada and the United States. Loving survivors include his wife; daughter, Kimberly (Tyler) Reimann of Flint, Texas; son, Terry (Debbie) Ford of Jackson, Missouri; cousin, Sharon Cole of Denver, Colorado; four grandchildren; and six great-grandchildren. He was preceded in death by his parents; brother, Jack Lloyd; sister, Maxine Brice and her husband, Tom Brice. In lieu of flowers, memorials may be given to Paul J. Lloyd Psychology Scholarship at Southeast Missouri State University Foundation, One University Plaza, Cape Girardeau, MO 63701, or St. Vincent de Paul Catholic Church at 1913 Ritter Drive, Cape Girardeau, MO 63701-4530. Visitation will be 10:30 to 11:30 a.m., Wednesday, September 23, 2020 at Ford & Sons Mt. Auburn Chapel. Funeral service will follow at the funeral home at 11:30 a.m. with the Rev. Rick Jones officiating. Burial will take place at Cape County Memorial Park Cemetery.

The family of Paul Joseph Lloyd created this Life Tributes page to make it easy to share your memories.

Paul Joseph Lloyd, 79, of Cape Girardeau passed away on September...

Send flowers to the Lloyd family.