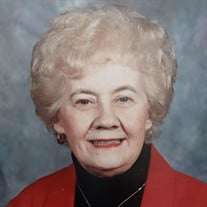 Pat Heisserer-Timmerman was born in Cape Girardeau on Aug. 27,1928. She died Aug. 10, 2020 at The Lutheran Home. She was a direct descendant of Anton Heisserer and Dietrich Schulenburg. Her fondest memories when growing up as a girl was living on South Middle Street. She recalled the 2nd Baptist Church choir singing on Sundays, and how beautiful it was. During the Great Depression, she could remember how difficult it was to eat while her father was away working on riverboats. Being the oldest child, it was one of her responsibilities to help take care of her four younger siblings. While World War II was going on, she would go out into the neighborhoods and collect desperately needed items for the war effort overseas. Many G.I.'s said "your mom did a lot for us while we were over there fighting." She collected funds to helped disadvantage children who were not as fortunate as others such as crippled children's fund, Muscular Dystrophy and March of Dimes. In 1959, she moved to Milwaukee, Wisconsin, and Chicago and became a military wife to James Timmmerman and had three children. Retiring in 1972, the family decided to move back to her home town of Cape Girardeau. She was a den mother for the Cub Scouts and was active in the PTA. She kept the prayer line at St. Francis Hospital going. She belonged to many clubs, and always cherished the good times with her friends who she enjoyed so much. She was a good-hearted, adventurous and fun loving person that never seemed to let anything bother her. She was interred at St. Mary Cemetery in Cape Girardeau on Aug. 12, 2020. Ford and Sons Funeral Home was in charge of arrangements. *************************************************************** Pat Timmerman, 91, of Cape Girardeau, Missouri died Monday, August 10, 2020 at the Lutheran Home in Cape Girardeau. She was born August 27, 1928 in Cape Girardeau at the old St. Francis Hospital to the late Emil and Norma Heisserer. She attended May Green Elementary School and graduated from Cape Central High School in 1946. Pat married James L. Timmerman on May 7, 1960. He passed away on June 17, 1994. She worked at Montgomery Wards Store and Southwestern Bell Telephone. She was a member of the Cathedral of St. Mary's. Survivors include two sons, Jeffrey Scott Timmerman of Cape Girardeau and David Brian Timmerman of Woodland Hills, California; a daughter, Lisa Ann Rose of Fenton, Missouri; two sisters, Dixie Pikey of St. Louis, Missouri and Judy Meinz (Walter Dean) of Cape Girardeau; and a brother, Billy R. (Betty) Heisserer. She was preceded in death by her parents. Private funeral service will be Wednesday, August 12, 2020 at Ford and Sons Funeral Home in Cape Girardeau. Private burial will be at St. Mary Cemetery in Cape Girardeau. Online condolences may be made at www.fordandsonsfuneralhome.com. Ford and Sons Funeral Home - Mt. Auburn is in charge of arrangements.

Pat Heisserer-Timmerman was born in Cape Girardeau on Aug. 27,1928. She died Aug. 10, 2020 at The Lutheran Home. She was a direct descendant of Anton Heisserer and Dietrich Schulenburg. Her fondest memories when growing up as a girl was living... View Obituary & Service Information

The family of Pat Timmerman created this Life Tributes page to make it easy to share your memories.

Send flowers to the Timmerman family.