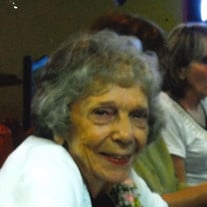 Palma Lee Owens, 97, of Jackson, Missouri died Saturday, October 24, 2020 at her home. She was born January 14, 1923 in Fruitland, Missouri to Albert and Rettie Thompson Kaufman. She was a graduate of Jackson High School and Steimle Business College. She and Dr. Vern Owens were married June 29, 1945. He preceded her in death on July 4, 1975. He was a survivor of the U.S.S. Bismarck sea. Palma worked in Columbia, Missouri for the Missouri Division for Employment Security as a Deputy Interviewer. She was the executive secretary for the U.S. Production and Marketing Administration. She worked as a receptionist and bookkeeper for the family Oak Ledge Veterinary Clinic for 25 years and worked for Social Security Administration based in Cape Girardeau. She also worked at Southeast Missouri State University in the University Museum as a receptionist. She loved her family and was loyal to each one. She was an avid bird watcher and loyal friend to all who knew her. She was a patriot and wrote over 12 different pen pals during WWII. She was a member of New McKendree United Methodist Church in Jackson. She is survived by three daughters, Debra Ann (Jim) Kaempfer of Gordonville, Missouri, Nanette Jo McDowell of Jackson, Toni (Dr. Peter) Martin of Springfield, Illinois; two sons, Dustin (Kym) Owens of Loma, Colorado and Dr. Mark (Patty) Owens of Park City, Utah; nine grandchildren, Sarah (Andrew) Owens, Liam Owens, Molly Owens, Micah (Elisabeth) McDowell, Hope (Forest) McClery, Dr. Simon (Nicole) Martin, Dr. Seth Martin, Samantha Martin and Matt Kaempfer; and nine great-grandchildren. She was preceded in death by her parents, husband, three sisters and a grandson, Adam Kaempfer. There will be a celebration of life at a later date. Burial will be at Russell Heights Cemetery in Jackson. Memorial contributions may be given to Humane Society of Southeast Missouri, 2536 Boutin Dr., Cape Girardeau, MO, 63701. Online condolences may be made at www.fordandsonsfuneralhome.com. Ford and Sons Funeral Home - Jackson is in charge of arrangements.

Palma Lee Owens, 97, of Jackson, Missouri died Saturday, October 24, 2020 at her home. She was born January 14, 1923 in Fruitland, Missouri to Albert and Rettie Thompson Kaufman. She was a graduate of Jackson High School and Steimle Business... View Obituary & Service Information

The family of Palma Lee Owens created this Life Tributes page to make it easy to share your memories.

Send flowers to the Owens family.