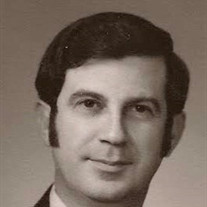 Orville Ray Krauss, 86 of Liberty, MO, formerly of Cape Girardeau, passed away Wednesday, June 24, 2020 at Norterre Nursing Home and Rehab. He was born Aug. 3, 1933 in Miner, MO to the late Charles and Lois Rae Krauss. On April 13, 1958 in Advance, MO he married Delores Seabaugh. She preceded him in death Nov. 30, 2014. They raised one son Eric, and four daughters, Carissa, Melissa, DeAnna and Cassandra. He received his bachelor and master’s degrees from Southeast Missouri State University. During his extensive 33 year career in education he held positions as Adult Education Coordinator of Cape Area Vocational School and Central High School Guidance Counselor. He retired as the Assistant Director at the Career and Technology Center in 2001. He served four years with the U.S. Air Force during the Korean War until 1957 and four years in the reserves. Orville was a member of Centenary United Methodist Church. Orville had a love for flowers and bird watching. You could find him in his yard tending to his flower garden on hot summer days. He enjoyed watching humming birds with his many feeders on the front porch. But his biggest love was his wife, Delores, whom he missed dearly and is now able to walk with hand in hand once again. Loving survivors include five children, Carissa (David) Albers of Kansas City, MO, Eric (Liz) Krauss of Ogden, UT, Melissa (Ron) McCarthy of Henderson, NV, DeAnna (Steve) Klokkenga of Chicago and Cassandra (Corey) Saranillio of Wailuku, HI; 10 grandchildren; 6 great-grandchildren; and sister, Karen McKinnie of Sikeston MO. He was preceded in death by his parents; his wife, Delores, sister, Janet Spitler and grandson Bennett Saranillio. Funeral service will be Tuesday, June 30, 2020 at 2:00 p.m. at Ford and Sons Mt. Auburn Funeral Home with Rev. Dr. Barry E. Winders officiating. Visitation will be from noon until the time of service. Burial with full military honors will follow at Cape County Memorial Park. Memorial contributions may be given to St. Jude Children's Research Hospital, 501 St. Jude Place, Memphis, TN 38105, or Safe Harbor Animal Sanctuary, 359 Creek Lane, Jackson, MO 63755.

The family of Orville Ray Krauss created this Life Tributes page to make it easy to share your memories.

Send flowers to the Krauss family.