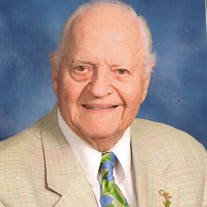 O. David Niswonger Jr. was a kind man known worldwide for growing extraordinary flowers. In the meantime he helped Southeast Missouri Hospital thrive after joining the administration in 1961, serving as its leader from 1976 to 1990. The son of a Methodist minister, he lived a life steeped in Christianity. The hospital named its Spirit of Southeast award for him, an award that can go to anyone who works for the hospital in any capacity. "He thinks we are all in service to each other," his daughter Mary Dee said. "Working for the good of others was one of his operating principles." Dave passed away peacefully Feb. 2, 2022, with his family by his side. He was 96. He was proud to be born in the living room of his grandparents' farmhouse in Patton, Mo, on Dec. 6, 1925. His parents, the Rev. Oscar David and Alma Niswonger, also had two younger sons, Ivan and Paul. Dave grew up in the Depression watching his grandmother stir stained farm clothes in a black kettle filled with boiling water and lye. He saw their lives improve as technology did. "My dad believed that technology, invention, innovation and science could improve this world for people," said his son David. That belief infused his nearly 30 years in hospital administration. He oversaw a period of immense growth and progress at the hospital. "He believed in and fought for progress," David said. Dave met Marie Deneke at a Methodist Youth fellowship before World War II. He was a Navy corpsman stationed at Sampson, N.Y. during the war, returning afterward to finish his degree at Southeast Missouri State University. He sought Marie out after the war, and they married Aug. 1, 1948, in Gordonville. Amazingly, all three of their children, David, Mary Dee and John, were born on Feb. 25. Dave earned a Master's Degree in Public Health from the University of North Carolina-Chapel Hill. They then moved to Poplar Bluff, where he was a state sanitation health inspector. Poplar Bluff is where a youthful interest in plant biology transformed into hybridizing flowers. When they moved to Cape Girardeau he worked for the American Heart Association as an educator and fund raiser. Hybridization became so important to him that often he would do it at night after coming home from a meeting. "We would be given a flashlight to hold for him while he made the crosses," Mary Dee recalled. His interest in hybridization took over when he got home from work. The family began a ritual of spring planting of gladiolus bulbs on Marie's brother's farm in the Gordonville area. In the summer the back seat of his Oldsmobile would be removed and replaced by buckets overflowing with cut flowers to be sold to florist shops. They went back in the fall to dig up the bulbs and in the winter sat in the farm smokehouse cleaning the bulbs for spring planting. The work was hard, though Mary Dee fondly remembers finding time to play with her cousins and the delicious sweet rolls her aunt made. The whole extended family in Gordonville got involved. He developed many hundreds of iris varieties and won international iris awards. He hybridized daylilies and daffodils as well. Dave's life was a kaleidoscope of interests. He learned to play the harmonica in elementary school and performed at Southeast Missouri Hospital parties. He loved singing and reciting poems, especially "The Face on the Barroom Floor," a lengthy ballad his father sometimes recited in church. Dave's son John says the song "Hymn of Promise" was especially meaningful to him. "In the bulb, there is a flower/ in the seed, an apple tree," it begins. "In cocoons, a hidden promise/Butterflies will soon be free. "In the cold and snow of winter there's a spring that waits to be/ Unrevealed until its season, something God alone can see…" John said his father believed the message in this song applied to hybridizing and to life. "He truly believed that each seed was special and came from God. Not one is alike. And they all contain different characteristics and traits. And that each one should be given a chance, just the same as every person is different and should be given a chance." Dave loved talking about history, particularly the Civil War. He co-wrote a book about the Niswonger family history. He was a member of Grace United Methodist Church, where he taught Sunday school. Church and Sunday school were elemental to his life. He and his son David shared a love of cars. On road trips, Dave could identify the year, make and model of any car built in the 1920s, '30s and '40s. David took over when the cars were newer. "We talked about cars a lot," David said. Growing beautiful flowers was a way of serving others and reaching beyond boundaries for him. He developed many friendships around the world with people who shared his passions. He was especially proud of connections with people who lived in communist countries that had few plants available to them. He sent them what he could to expand their knowledge and improve their gardens. Surviving family members are his children David Niswonger, Mary Dee Denning (Richard) and John W. Niswonger (Lisa); grandchildren Lily and Carrie Niswonger, Kate DeLoache (Will), Kali Francis (Chris) and Joe Niswonger (Sarah); and seven great-grandchildren. Marie, a longtime schoolteacher, died in 2002. The family is having a private service. Friends are invited to a Celebration of Life service March 19 at Grace United Methodist Church in Cape Girardeau. A receiving line will begin at 10 a.m. followed by the formal service at 11 a.m. The Rev. Eric Schmidt will officiate. Donations in Dave's memory can be made to the Southeast Health Foundation, Grace United Methodist Church or the Foundation for Rotary. Online condolences may be made at www.fordandsonsfuneralhome.com Ford & Sons Funeral Home - Mt. Auburn is in charge of arrangements.

O. David Niswonger Jr. was a kind man known worldwide for growing extraordinary flowers. In the meantime he helped Southeast Missouri Hospital thrive after joining the administration in 1961, serving as its leader from 1976 to 1990. The son... View Obituary & Service Information

The family of Mr. O. David Niswonger Jr. created this Life Tributes page to make it easy to share your memories.

Send flowers to the Niswonger family.