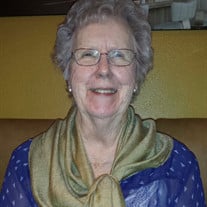 Nina M. Stevenson, 89, died August 16, 2020 at Copper Creek Cottages in Litchfield, IL. She was born on February 27, 1931 in Crawford County, IL to Vernon and Fannie Jones. She married Robert L. Stevenson of Champaign, IL. on July 10, 1954. She was a lifelong member of the Christian Church, (Disciples of Christ), serving as deacon and elder. She enjoyed sewing, crochet, needlepoint and was an avid baker, gardener and bird watcher. She was a fierce player in Dominos. She volunteered for The Red Cross, the Senior Center and The League of Women Voters. Following the death of Robert L. in 1998, she spent time care giving and visiting family members. She met Roy L. Monke in early 2005 and the two were married on December 4, 2005 at Abbey Road Christian Church in Cape Girardeau, Missouri and she moved to Mt. Olive, IL. They spent several years traveling the United States, from Key West to Alaska in their RV. Nina and Roy were active in the local chapter of Senior Achievers, enjoying the monthly meetings and field trips. She volunteered at Hearts United in Litchfield, IL. Loving survivors include her husband, Roy Monke of Litchfield, IL, her children, Linda Stevenson Green of Cape Girardeau, Nancy Stevenson Matherne (Dan) of Antioch, Tennessee, Robert L. Stevenson, Jr. (Karen) of Cape Girardeau; her sister, Juanita Lewis of Oblong, Illinois; and numerous nieces and nephews. She was preceded in death by her parents; her husband, Robert; sisters, Mary Price and Naomi Deaver; and brothers, James and Jack Jones. She will be dearly missed by those who love her. A private service will be at Cape County Memorial Park Mausoleum in Cape Girardeau at a later date. Memorial Contributions may be given to Union Avenue Christian Church in Litchfield, Illinois, Abbey Road Christian Church in Cape Girardeau or Immanuel Lutheran Church in Litchfield, Illinois. Ford and Sons Funeral Home is in charge of arrangements.

The family of Nina Mae Stevenson created this Life Tributes page to make it easy to share your memories.

Send flowers to the Stevenson family.