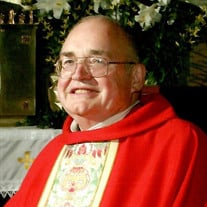 Reverend Monsignor Edward Martin Eftink, Ph.D. October 26, 1938-March 8, 2021 Monsignor Edward Martin Eftink was born near Portageville, Missouri, on October 26, 1938, and departed this life on March 8, 2021, at the Lutheran Home in Cape Girardeau, Missouri, at the age of 82. He died of congestive heart failure. Monsignor Ed’s education began at the Vanduser School, in Vanduser, Missouri. He later attended Guardian Angel Elementary School in Oran after the family moved there. He attended Cape Girardeau Catholic High School, (later named Notre Dame High School) graduating in 1957. Next, he attended St. Louis University in St. Louis with intentions of becoming a lawyer, but during his first year in college he felt a call to the priesthood. He shared this change of heart with his cousin, Betty Priggel Wallen in a letter before telling his parents of his intentions. A heavy snow prevented him from going home to tell his parents, so the letter was delivered to his cousin Betty first before notifying his parents. He entered the seminary at Conception Seminary College in 1958 and continued his study at Cardinal Glennon Seminary in St. Louis. Monsignor Eftink was ordained a transitional deacon on June 6, 1965. Then on May 14, 1966, he was ordained a priest for the Diocese of Springfield-Cape Girardeau by the Most Reverend Ignatius Strecker, at Guardian Angel Catholic Church in Oran, Missouri. He later earned his Ph.D. at Catholic University in Washington, D.C. in 1971. Monsignor Eftink’s pastoral assignments include: Immaculate Conception parish in Jackson, Missouri and St. Edward mission in Dutchtown; Immaculate Conception in Springfield; St. Mary of the Annunciation Cathedral parish in Cape Girardeau; Sacred Heart parish in Webb City; St. Mary parish in Pierce City; St. Joseph the Worker parish in Ozark. Monsignor Eftink served as Diocesan Superintendent of Schools from 1977 to 1990. He was named a Monsignor on March 8, 1990. In 1991, he returned to the parish of his first assignment, Immaculate Conception parish in Jackson, where he retired from active ministry on July 1, 2008. In retirement, Monsignor Eftink continued in part-time ministry as an“Outreach Preacher” for weekend Masses in parishes across the United States for Cross International Catholic Outreach until a stroke forced him into full-time retirement. Msgr. Eftink was the oldest of eight children born to Henry and Delpha Kathleen (LaFont) Eftink. Surviving brothers include: Michael and wife Jean Eftink of Cape Girardeau, MO; Larry and wife, Fran Eftink of Springfield, MO; David and wife Doris Eftink of Oran, MO; Louis and wife, Deborah Eftink of Sedgwick, KS; Kenneth and wife, Rebecca Eftink of Bloomfield, MO. Msgr. Eftink is survived by 25 nieces and nephews, numerous great-nieces and nephews, and numerous great-great nieces and nephews. He was preceded in death by one brother and sister-in-law, Thomas and Mary Ann (Goetz) Eftink; and his only sister, Barbara Eftink Jarvis. It was Monsignor Eftink’s request that his body be donated to St. Louis University for medical research and that there be two Memorial Masses. Parish Prayers followed by Rosary will be conducted 7:00 PM on Thursday, March 11, 2021 at Immaculate Conception Parish in Jackson, MO. The first Memorial Mass will take place on Friday, March 12, 2021 at 11:00 a.m. at Immaculate Conception Parish, 208 S. Hope St. in Jackson. The second Memorial Mass will be on Saturday, March 13, 2021 at 11:00 a.m., at Guardian Angel Parish, 604 Church St., Oran, Missouri. Memorial contributions are appreciated to the Cross Catholic Outreach. Arrangements by Ford and Sons Funeral Home in Jackson, MO.

The family of Msgr. Edward Martin Eftink created this Life Tributes page to make it easy to share your memories.

Send flowers to the Eftink family.